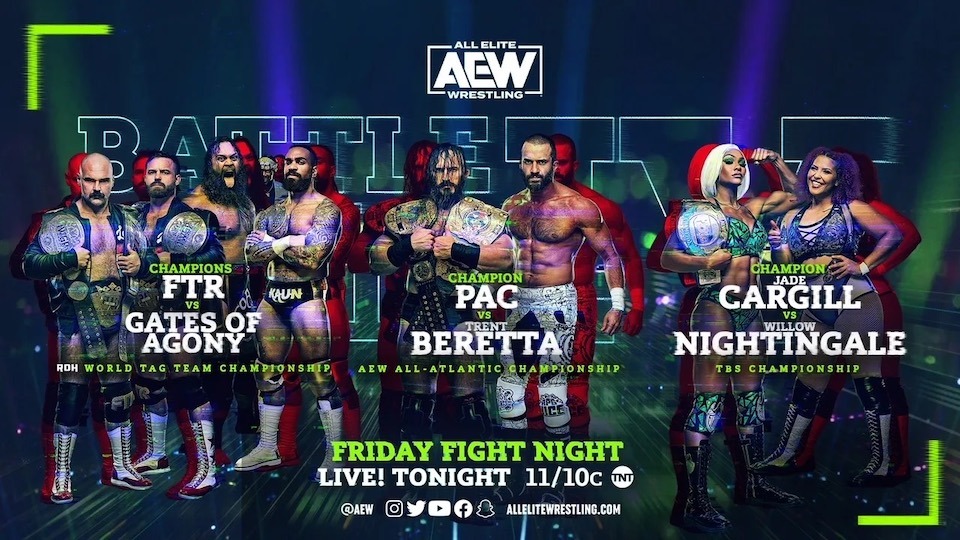 All Elite Wrestling offered a special two-hour evening this Friday, October 7, 2022 with an episode of AEW Rampage and the show Battle of The Belt IV.

The evening begins with the three-on-three match between Rush and Private Party and the Blackpool Combat Club of Jon Moxley, Wheeler YUTA and Claudio Castagnoli. Jon Moxley who has signed a 5-year extension with AEW, as reported by commentators.

Jon Moxley, Claudio Castagnoli and Wheeler Yuta beat Rush and Private Party by submission with short-arm scissors to make Marq Quen give up. Nice opener, and congratulations to Castagnoli for the double-swing.

Tony Nese and Josh Woods defeated the Varsity Blonds by pinfall with an Olympic Slam/swinging neckbreaker combo on Griff Garrison. Arn Anderson saw the game behind the scenes, and he’s not happy.

After the match Mark Sterling announces that he has registered the name “Varsity” and that no one else can use it in the world of wrestling. Nese and Woods are therefore now called the Varsity Athletes. He then brings up The Acclaimed who he didn’t have a good time with on Wednesday at AEW Dynamite. The interested parties make their entrance, and quickly scare the heels out of the ring before celebrating with the public.

Swerve Strickland is pissed off, and he’s wearing a “Heel” t-shirt. He announces that he will injure Billy Gunn on Wednesday at AEW Dynamite.

The main event is the match for the Trios Championship titles defended by the Death Triangle of PAC, Penta and Rey Fenix ​​against the Dark Order of John Silver, Alex Reynolds and 10. PAC will also have two matches tonight, since it must also defend the All Altantic title.

The Death Triangle defeated the Dark Order by pinfall with PAC’s Brutalizer on Alex Reynolds to retain their titles.

Jose The Assistant came to distract the referee during the match so that Rush could give the timekeeper’s hammer to a PAC who was a little skeptical about the situation, but who ended up accepting the present with which he hit Alex Reynolds.

AEW Battle of The Belts IV

We continue directly with Battle of The Belts and we are not the only ones to continue since PAC directly defends its title of All Atlantic champion against the Best Friend Trent Berretta.

PAC defeated Trent Barretta by pinfall after hitting his opponent with the timekeeper’s hammer, again, to retain his title. An excellent match but which in any case will not pay tribute to the referee’s work, the hammer having appeared in the ring under the eyes of the referee after the match.

After the match it’s a furious Orange Cassidy (yes, it exists) who arrives to attack PAC and probably come to claim a new match, which will be announced later in the evening for the October 12 episode of AEW Dynamite.

In an interview the Jericho Appreciation Society still wants Daniel Garcia back, while Jericho says he will be the Lionheart again for his match against Bryan Danielson.

The TBS title is on the line in the next match. Jade Cargill, TBS champion from the start defends her title against an opponent who has already tried her luck several times.

Jade Cargill defeated Willow Nightingale by pinfall with his Jaded Slam to retain the TBS title.

Vicky Guerrero came on next to distract the champion while Nyla Rose attacked and grabbed the TBS Championship belt before fleeing through the crowd.

FTR defeated The Gates of Agony with a Dax Harwood backslide over Bishop Kaun to retain their titles.

After the match Brian Cage arrives to help the Gates of Agony attack FTR, but Wardlow arrives, then Samoa Joe to clean up.