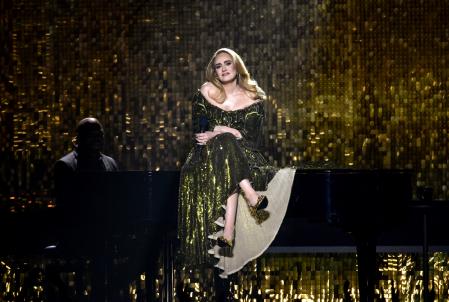 The Brits are a mixed bag. There is room for the songs of Ed Sheeran, the rap of Little Simz, the alternative touch of Sam Fender and Wolf Alice and the almost forgotten rock of Liam Gallagher. Also a Disney girl like Olivia Rodrigo. Everything, to end with the coronation of Adele, who has returned to the place that catapulted her to fame and has added three Brits, including best album, best song and best artist.

The London singer is already the second artist with the most Brits in history, with twelve awards to her credit, above Coldplay, which has nine, but far from the 18 of Robbie Williams, who won thirteen solo and five more when He was part of Take That.

Adele’s presence was the great claim of the night. For her history at the awards – she trained at the Brit School in London – for her favoritism, for her elegance and magnetism and because her voice is one of the British treasures. From the moment that she has walked on stage, she has sat down and started to sing I Drink Winethere was no doubt who would win.

It has been awarded first with the song of the year, by Easy On Melater awarded as best artist of the year, and later crowned with the award for best album, the great category of the night.

I always like to come home. The Brits are a very important part of my life.”


“I always like to come home. The Brits are a very important part of my life. I am very proud to be an artist and to be a woman,” Adele commented in her speech, dedicating the award to her son.

Adele has been the peak of the evening, held at the O2 in London before some 4,000 people, still far from the 15,000 that were cited in the pavilion before the pandemic.

A gala with some political dart against Boris Johnson: “If you want to come, you’re invited, I’ve heard you like parties,” the presenter joked

The gala was conducted by the comedian Mo Gilligan, who has taken over from Jack Whitehall, a classic of recent editions. Calmer and less sarcastic than Whitehall, Gilligan has indeed had the brilliance to, on a very unpolitical night, throw a taunt at the Government.

“If Boris Johnson wants to come, he’s invited. I’ve heard he likes parties,” Gilligan joked, before the catharsis of music and styles that the Brits are.

The pop-up figure of Little Simz

Ed Sheeran, who has won his seventh Brit, as best songwriter of the year, which ties him with Arctic Monkeys, U2 and One Direction, has opened the ceremony with Bring Me the Horizon, playing his well-known Bad Habitwhile Little Simz, the rapper of the moment in the United Kingdom, has ignited the masses by winning the Brit for best emerging artist.

“Look what you’ve accomplished,” he said. Simbi, as she is also known, to her mother, who has accompanied her on stage to collect the award in a mixture of nerves and emotion. “If you work hard, no matter your race, where you come from, you can achieve something great,” she added.

His performance has been one of the most celebrated of the night, almost as much as that of Sam Fender, the Newcastle icon who has won in the category of best alternative rock album. Of the few mentions of this genre, along with Liam Gallagher’s show, which he has appeared with his usual Oasis-era grim reaper to play Everything’s Electricsingle from his third solo album C’mon You Know.

Dua Lipa, Billie Eilish and Bruno Mars are not left without a prize

Dave has scored the Brit for best rap and hip hop artist and the one for best international group has gone to the duo of Bruno Mars and Paak, Silk Sonic.

With The Joker and the Queenby Ed Sheeran, and in the fireby Dave, the Brits have closed one of their most varied editions, reminding once again that the edges of British music have no end.