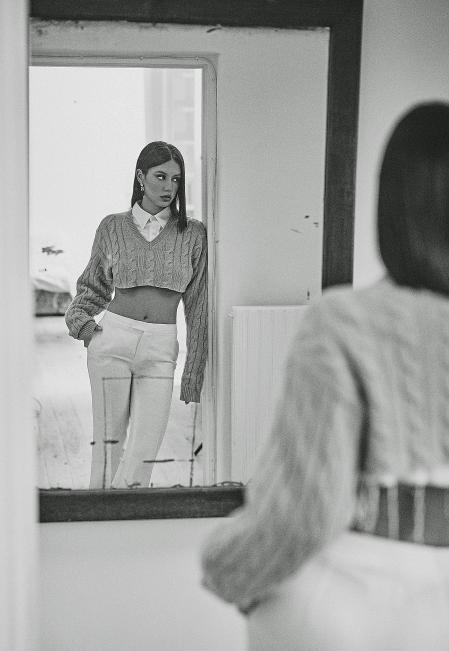 His film debut was risky to say the least. However, it was precisely that leading role, in the controversial and intimate lesbian drama La vida de Adèle by director Abdellatif Kechiche and alongside Léa Seydoux, that gave Adèle Exarchopolous (Paris, 1993) international projection.

With an intense look and a childlike smile, the French actress chooses characters like her, intense and emotional, fragile but brave. The last one she has played is that of Cassandra in Rien à foutre, a mandatory drama about the world of flight attendants and the need to connect emotionally that, after the pandemic, lands on the screen just in time.

What was the exact moment when you decided to be an actress?

I really never dreamed of being. My parents asked me to choose an extracurricular and I chose improvisation. During a class, a casting director saw me and took me to an audition. I got the job and I remember thinking, “Are people getting paid for this?” I’m still looking for that feeling that comes with telling someone else’s story. My passion stems from a childhood desire rather than a professional choice.

The best advice I have received was given to me by Christopher Waltz, he told me: work”

Nine years have passed since the success of La vida de Adèle. How do you value that experience now with the perspective of the years?

It was a great human and emotional experience. Now I see the opportunities it brought me and the credibility it gave me. At that time it was risky because I had to make the right decisions, but today I have worked enough to appreciate what I got thanks to her.

In fact, the emotional complexity of Adèle’s character is very present in Cassandra, her new role in the film Rien à foutre. Do you share anything else?

I see the similarities in the filming process and the directors’ perspectives. There is a kind of tenderness in the way they see this generation, a bit of irony, humor and a lot of emotions. We were surrounded by real people, playing real characters, who brought out the naturalness and reality in us. There was no hairdressing and makeup team, the only wardrobe was for the stewardess, and the rest, whatever we had on hand. I was wearing the director’s sweater, a tracksuit of mine and the other director’s sandals.

Was it difficult to interpret it?

The difficulty in playing her was that she never gets attached and I’m the complete opposite. I am much more emotionally dependent. The challenge of playing Cassandra was not being able to fill the void that she found herself in. It’s what I find most difficult in cinema: it’s not showing emotion, doing love scenes or fighting scenes, it’s the mundane. The real things that happen every day.

If you could play any character, which one would you choose?

The gift of this industry is navigating between genres. If I had to pick one type of character, it would be someone from a big sci-fi movie, like X-Men.

What is it and who gave you the best advice to dedicate yourself to the film industry?

It was Christopher Waltz, just after obtaining the Palme d’Or at Cannes for Adèle’s Life, he told me: “Work”.

She always makes powerful characters, but what is Adèle like off screen?

I am like them, intense and emotional. It’s hard to define yourself, but I guess the difference is in my simplicity.

She is jealous of her private life, is it possible to combine fame and everyday life?

I try to find a way. I know that many people found out late that I had a son because I would never post anything about him online. We cannot forget that it is a virtual world and most people use it to validate themselves. For me it’s simple: the less they know, the less they can get to you.

You have also made your foray into fashion, what attracts you to it?

For me it is a game of fantasy and mystery. I choose the brands I work with because of what arouses me… Bulgari, because of his family heritage; Fendi for his chic character, or Paco Rabanne, for his sensuality. I also like that diversity of cinema in fashion.

Adèle Exarchopoulos, high intensity: “The difficult thing about cinema is not showing emotion but the mundane”