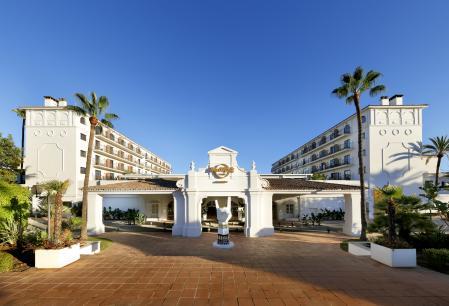 A few decades ago Marbella was the most glamorous destination. However, those days are over and a certain Marbella image is as old-fashioned as the expression jet set used by its famous visitors. Today, its tourist offer is modernized to adapt to current trends.

An example is the recent opening of the Hard Rock Hotel Marbella a stone’s throw from Puerto Banús. The American brand, hand in hand with the Palladium Hotel Group, has completely remodeled an old hotel from the 70s. Although the typical ornaments of Andalusian architecture are respected externally, such as the wrought iron bars on the terraces, the change has been total.

Starting with a decoration enlivened by objects from the collection of musical memorabilia that the Hard Rock firm treasures. In the lobby or corridors one comes across Elvis or Lenny Kravitz guitars, Shakira tops, Lady Gaga clothes or records signed by The Beatles. Without forgetting Hispanic nods to Alejandro Sanz or Raphael, so far removed from R&R.

Actually under the umbrella of Hard Rock Hotel Marbella there is room for any sound. For all tastes and at any time. For example in the Sessions Restaurant at breakfast time. While you drink coffee, perhaps a harpist covers classical music, or perhaps the first drink of the day is enveloped in the oriental atmosphere produced by an Indian sitar, also rigorously live.

That to start. Then more danceable rhythms will sound in the two pools, both in the infinity pool of the roof that covers the lobby, as in the outdoor pool where there is no lack of a DJ booth. And since tourists don’t live by music alone, in both pools there is the possibility of having a drink in two bars: the Sun Society and the Eden Pool Club.

Also inside the HRH Marbella you can use the GMT +1 bar, very lively as evening falls, both for its cocktails and for the music that plays. Always live and always different, from the pianist playing ballads in the back, to the rock musicians or rhythm and blues who plug their amps and they perform on the circular stage in the lobby, in the heart of the hotel. It couldn’t be any other way until it’s time to rest and turn off the music.

However, the party can continue. Some people rent a classic Crosley turntable to enjoy the best vinyl in the room. And even the most guitar players get a Fender Stratocaster at reception, with their respective headphones to play its six strings without fear of complaints from other guests. The one in Marbella is a Hard Rock Hotel in its purest form and given the success of its first summer, it promises to expand its range of rooms, facilities and services for next spring.