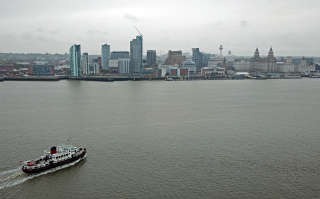 An aerial view of Liverpool in England.

EUROVISION – It didn’t drag on. After Friday’s announcement of the choice of the city of Liverpool to host the Eurovision Song Contest in May 2023accommodation prices there immediately increased drastically for the dates of the event (semi-finals on May 9 and 11, final on May 13).

Many rooms in the English city have already been booked, and the cheapest night on the night of the final is now displayed at around 1,000 pounds on the Booking.com site. A house is even advertised at just under 8,000 pounds that evening.

The organizers are “naturally disappointed” that some have “decided to try to take advantage” of the organization of the event by Liverpool, said Chris Brown, Director of Marketing Liverpool. “We would definitely tell anyone who has seen these prices not to book”.

Separately, some people who had booked accommodation before the city’s choice was announced on Friday – sometimes months before – reported that their booking had been cancelled, before their room was then put back on sale at a much higher price. raised.

According to Chris Brown, “a number of rooms” have, however, already been allocated to artists and presenters “at rates acceptable to Eurovision as part of the bidding process”.

Later in the week, local officials are expected to promote more accommodation options in and around the city. “It could involve cruise ships or opportunities around a campsite, we have a pretty solid plan”explained Chris Brown.

Options could also include accommodation in Manchester and Cheshire, which are less than an hour’s drive from Liverpool.

After its symbolic first place in Turin, Italy, last May, Ukraine had been taken away in June the right to host Eurovision by the European Broadcasting Union (EBU), which had considered that the security conditions were not met because of the invasion of the country by Russia.

Prior to the choice of the city of Liverpool last Friday, an agreement was announced on July 25 by the EBU and the British government for the BBC to organize the contest in the UKwhich came in second behind Ukraine, in a version that will feature the country still at war.