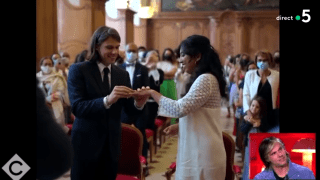 Passages from Orelsan’s marriage can be found in the second part of the documentary devoted to the continuation of his career and the writing of the album “Civilization”.

MUSIC – After the story of his rise, place the story of his success. Back on Amazon Prime Video with the second part of his documentary never show that to anyonethe rapper Orelsan lent himself to the game of the promotion this Monday, October 10.

The opportunity for the artist behind Civilization to go behind the scenes of some of the images captured throughout his life by his brother Clément Cotentin. And like the Orelsan book on the set of It’s up to youthe presence of his own marriage in the documentary is not a coincidence and even less of an excess of ego.

“You don’t hide anything from us in the documentary, until the wedding? »asks the columnist Mohamed Bouhafsi after the broadcast of an extract on the famous marriage of the singer with his wife Ahélya. “You might think it’s in people mode, like I put my marriage, but there really is a justification”, advances the artist.

💒 OrelSan’s marriage to his wife… 🥺

In effect, the four new episodes of the documentary sequel on the life of Orelsan will mainly focus on the period surrounding the release of his latest album Civilization. And Aurélien’s marriage to his wife played a very special role in this album, as his brother explains later.

“Compared to the song ‘La Quête’. Orel is stuck, he is looking for the end of this song and there is his wedding which happened a month before. And it’s this memory of the wedding that Orel had time to digest, where on his wedding day he was a little panicked. And that’s what allows him to unlock the end of this song, ” develops the director of never show that to anyone.

Clément Cotentin even adds: “It was our line of conduct to say to ourselves: if it helps to understand his music, we put it on, if it’s just to put intimate images, it’s not worth it”.

An intimate sequence which is reminiscent of that of its clip family defeat where Orelsan did not hesitate to stage himself in the role of different members of his family during a festive meal to tell his deep dislike for these endless family reunions, except that this time Orelsan does not play comedy.

Expected on October 13 on the Amazon streaming platform, the sequel to the documentary devoted to the career of Aurélien Cotentin must dive more deeply into the creative journey of the rapper from Caen, during the creation of his latest album, cs you can see in the trailer below.

” I had a question in mind: how he was going to come back after his greatest success. I wanted to film everything, from the first word written to the last note played “, already promises Clément Cotentin in the teaser for the second season. Despite doubts and failures, all narrated in the documentary, the album Civilization has since become the best-selling album of the year 2021, according to SNEP.

See also on The HuffPost: