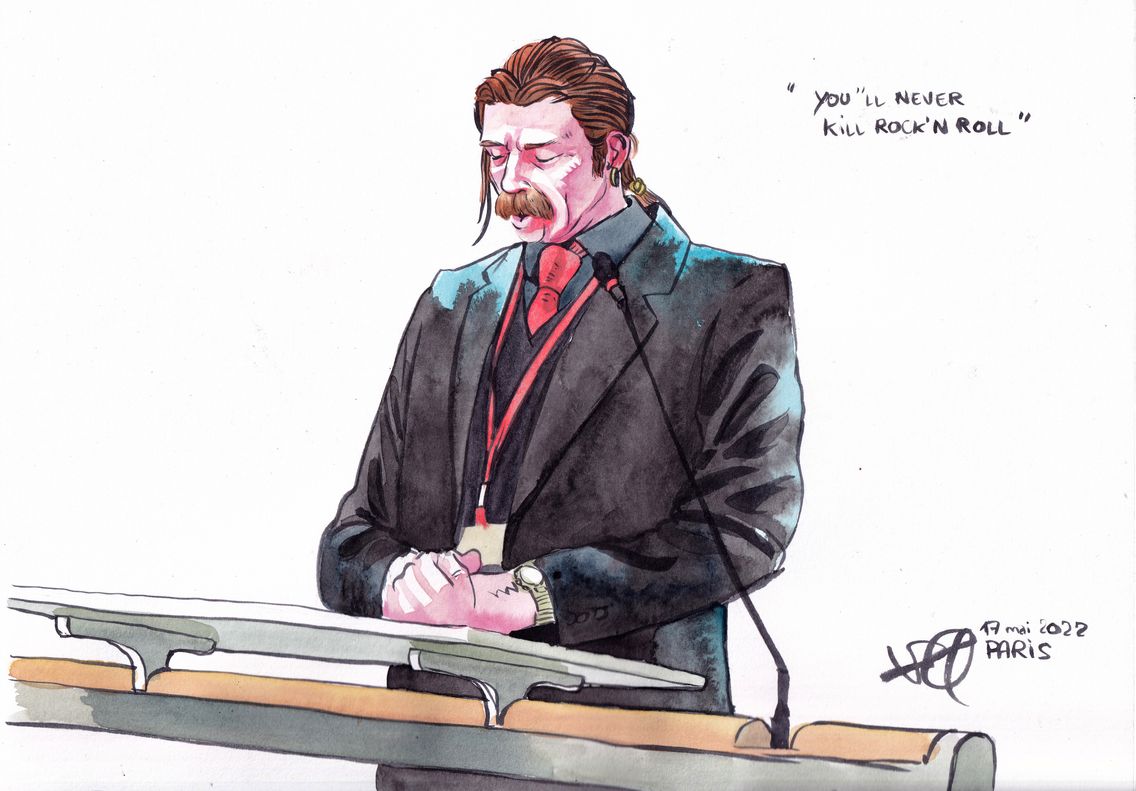 After a week of suspension linked to the Covid, the hearing resumed with the testimonies of the victims. Including two members of the Eagles of Death Metal band who played at the Bataclan on November 13, 2015.

They were to testify last week, the Covid-19 wanted otherwise. It was finally a week late that Jesse Hughes, singer of the Eagles of Death Metal and Eden Galindo, former guitarist of the group, took the helm. Both dressed in black – rock’n’roll obliges – with the exception of a bright red tie for Jesse Huges.

Both seem intimidated to be there, testifying soberly. This November 13, 2015, “my group was particularly happy to play in Paris”, says Jesse Hughes at the helm. “We love Paris, it was the best concert of the tour”, even declares Eden Galindo. Until the first explosions. “Coming from a desert region in California, the sound of gunfire is very familiar to me” says Jesse Hughes. He understands right away, “feels death approaching”.

“90 of my friends were killed that night”

The guitarist, he believes in a sound problem. Until he sees “Jesse come running towards me. I asked him: ‘What the f… is going on?'”. Quickly, they manage to flee. They meet on the boulevard, “an angel named Arthur put us in a taxi and sent us to the police station”, continues the singer of the Eagles of Death Metal. Later, they will learn of the death of Nick Alexander, commercial manager of the group. “But I already knew that we had lost friends because I consider all the spectators as friends.” says Jesse Hughes “and 90 of my friends were killed that night.” Eden Galindo says:

We went back home. I felt like broken. It was very difficult to go back to a daily life.

“I didn’t know if I would have the strength to go back on stage one day”, adds Jesse Hughes. Eventually, the power of music was stronger. The band returned to Europe to finish their tour. “And being together, talking night after night about what happened, helped me a lot.”explains the former guitarist, “today, I have magnificent binoculars. I live a different life. But I will never be the same again. And I would just like to tell the families of the victims that I think of them every day and I pray for them.“Jesse Hughes prays, too. For”those who committed these acts, for those men whom he forgave“, he says. “So that light shines on them.” Before concluding at their address: “You can’t kill rock’n’roll.”

The musicians leave, the journalists too

The Eagles of Death Metal are on their way again. The majority of journalists and civil parties who came to listen to them too. The testimonies of other victims then continue in the more subdued atmosphere that has settled over the months. Alice, who had made the trip especially from the province where she lives and who, arriving early, was able to take a photo, entwined with the singer Jesse Hugues whom she projects to the audience. “It foreshadowed a beautiful evening“, she says at the bar. Julien, Guillaume, Bertrand. Jaël, arriving early with her best friend “because for us it was: first rank or nothing”. Ophélie, Scott, Camille, who was about to celebrate her 25th birthday and felt “happier than I had been for months because in 2015 I was going through a pretty severe period of depression”.

Because they did not feel capable of it in October, had just lost a child, born prematurely, because it seemed to them “impossible”, they chose to take advantage of this new session of testimonies to come and tell “their” 13-November. First those firecracker noises so often described at this bar. Then this “young man with a submachine gun in his hand” says Cedric. “I tell myself that he is unbalanced and that he came to make a bad joke”.

Alice, she remembers her “ jogging and white T-shirt and I say to myself: “So this is a terrorist? “The rest, for all, is a struggle for survival. The impossible choice: flee at the risk of being hit in the back or stay at the risk of being hit too. Camille says to herself “ unable to stay a second longer in this hell, even if it meant dying trying”. Elsewhere in the pit, Scott makes the same decision. Guillaume, wounded, has taken refuge in a lodge where a woman gives him her scarf to make a tourniquet. “ That night it wasn’t a scarf it was pure hope ”, he explains. He’s kept it ever since, has it” worn all winter ” and took her to the hearing. It was only months later that he realized that it was adorned not with skulls, but with owls, says Guillaume again.

“You are a victim sir, period.”

The after. they all talk about it with emotion. “From November 14, a new hell will begin”, confides Camille. “ But I thought it was going to pass and I didn’t seek help “. On the contrary. ” I started to lie, to hide my pain, as much as possible . But the darkness born on November 13 has grown. And she made me someone I hate. Violently sometimes. I feel like I was rewritten at 9:47 that night .”

Cédric tries to resume his job as a history-geography teacher, to explain, to dissect the event with his students. But, like Magali, a teacher in a large kindergarten section, the attack alert exercise, which teachers are responsible for organizing for their students, will constitute a new insurmountable obstacle. Cédric takes refuge with his parents. ” One day my mother asks me to go buy tomatoes. For me, that means remembering what she told me, getting out of the house, interacting with other people. So many things I can’t do .”

We all want to say to ourselves in this kind of situation, we behave like heroes. And that’s not my case at all. To get out I jostled, I pushed, I trampled on everything that was in my way. And I’m really sorry about that.

Because you have to live with the memory of the Bataclan. Or, sometimes even worse, the absence of memory. This was the case with Felix. “I did some dissociation. I knew that I had been in the room, but I had no memory of it”explains the young man at the helm. So he resumes his life as if nothing had happened. Or almost. Because he is left with this “hangover feeling, where you feel like you’ve done something stupid, without knowing what”. After three yearsto get by”, Félix finally begins therapy. “This therapy has paid off”, he says painfully, the sentences chopped up by emotion and tears. “I remembered everything. I remembered my body on autopilot doing everything to get out. ” At the bar, the young man with a frail silhouette struggles to continue his story. Cries. Apologizes.

“We all want to say to ourselves in this kind of situation, we behave like heroes. And that’s not my case at all. To get out I jostled, I pushed, I trampled on everything that was in my way. And I’m really sorry about that.” He stops again, in tears. Then ends his testimony: “I’m not in the dock, but it’s something that haunts me all the time. I live locked up with my guilt.” So the president wants to add a few words to this terrible conclusion. “You are a victim, sir. Point”.

Find all our articles devoted to the report, day by day, of the trial of the attacks of November 13, 2015 here .

Trial November 13, day 122: “You can’t kill rock’n’roll!”, exclaims the singer of the Eagles of Death Metal