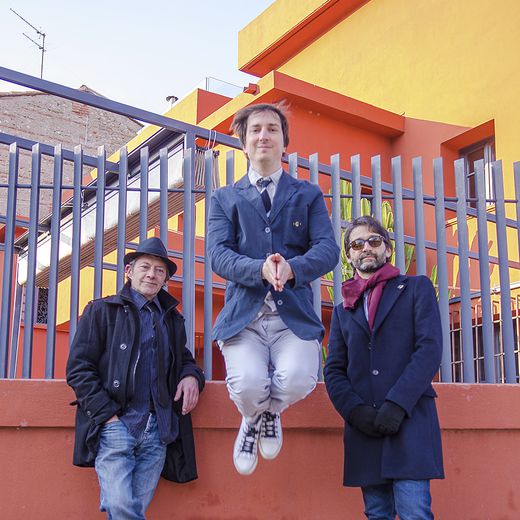 A break in rock? It was missing. A little cushy, covid, letting himself be put to sleep by Temple merchants most often offering often outdated recipes, needed a start, a direct to the liver. Valentin Estel’s project (centre in the photo) “La Flèche” is releasing its first breath this week, “Varieties Fanfaronnes”, in a French rock niche at its most noble. Fine 70-mid 80 influences, lyrics combining the absurd, the literary and the horizontal spin, but far from the Parisian bourgeoisie and studied with a Chatterton Fire perfumed with the essence of Guerlain. Our dandies arrive, let’s know how to welcome them as it should be.

Stilted does not mean to prepare. Class doesn’t mean social distancing either. And Valentin Estel’s literary studies do not make him a literature teacher imbued with himself, measuring the interest of a student by his marks exceeding 15 on average. Drowned in their veneration for Gide, Proust, Céline, Dostoïevski, Baudelaire… This fervent reader, lover of the verb at its best, knew how to transform these sacred proses into anamorphic rock strokes, sculpted in a marble that is part of a story that has completely shaped us. Listening to “Variétés Fanfaronnes”, it is the Bijou trio or the Bashung first period from “Russian Roulette” to “Play Blessure” that reappear (see chronicle opposite).
However, Valentin Estel comes from garage rock, chalky blues, and his parallel collaborations (Pneumatics Serenaders, Cavale) make him a game master in styles that are completely anachronistic to the rigid box of garage rock. Stylist of the six strings, with a game endowed with parsimony and acid gimmicks, he put his knowledge of the stages and the studios on “La Flèche”. Well reflected in the visuals, the three clips “Varieties Fanfaronnes”, “Ca Suinte”, “Intrépide JJ”, which preceded the release of the first opus on Youtube, are a call to classy foutromania and his love of cinema. bittersweet author and françouze chilled from the marrow. A trio goes where it breaks. It could be a 3rd half porn adage, but experience has shown us that symbiosis, if not perfect in music, can quickly degenerate. The recording of the album at Casa Musicale was done live in the studio with sound engineer David Cook, so, on that side, no panic for the setting up, listening , it is lustrous:

“I wanted a resolutely rock album, Dutronesque at the beginning, but which will move in the future, towards something more funky, dancing with texts that are still just as offbeat. I’m a fan of Chic, Nile Rodgers, Talking Heads, The B-52’s, Television, Bashung… So obviously it shows. The Mitterrand years, young modern people, I find myself very much in this state of mind. It’s a project that I’m really working on, very professional, with real cohesion but without markers or well-defined boxes. »

Irony, sarcasm, derision, algid madness, sharp rock giving an irrepressible desire to dance in underwear on the terrace facing the haggard neighbors, “La Flèche” will point to more than friendly scenes: July 27 in the first part of HF Thiéfaine at the Live at the Campo, on July 8 at the Planèze Festival, the FID evening at the Mediator on September 24, and many other sweet treats to come.
Thierry Grillet

The three-piece suit of the new rock group La Flèche