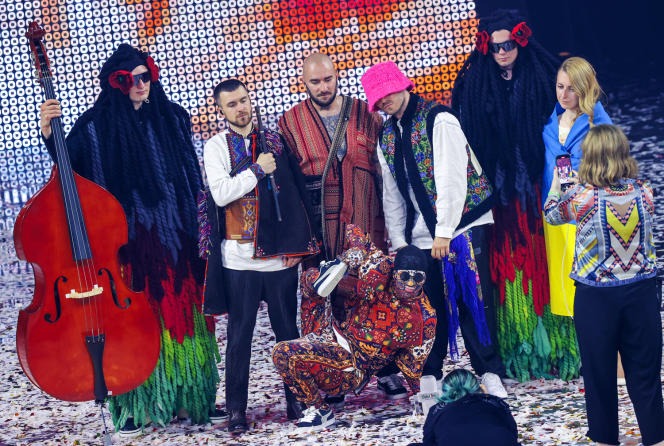 It was written. Saturday, May 14, in Turin, the great annual fair of bad taste and bad music saw the triumph of Ukraine and its group Kalush Orchestra. Author of a title mixing hip-hop sounds and traditional flutes (the tilinca and the sopilka, to be precise), the group was widely acclaimed by the public vote, sensitive to the context, of course, and to the history of the members. of the group. All of age to be mobilized, the six boys of Kalush Orchestra obtained an exemption to compete in the competition and had to return to the country the next day to participate in the war effort.

On stage, Kalush Orchestra had taken care of appearances. The group’s leader and vocalist, Oleh Psiuk, sported a thunderous neon pink bob. The artist’s signature has always been, according to a quick search on Google Images, the accessory in question allows us to remember that this pink, pushed in particular by the house of Valentino, is one of the colors of the moment. And above all to repeat that, if the bucket hat has imposed itself in usage, it is for a very specific reason: flexible and rollable, it can, unlike many other models of hats, slip into a pocket.

Read also: For Jean-Luc Mélenchon, it’s in the pocket

A chance at embroidery

If the group didn’t do lace from a stylistic point of view, it did at least do embroidery. Several of the line-up members wore a vyshyvanka on stage. This traditional shirt with embroidered patterns is considered in Ukrainian folklore as a talisman protecting against evil spirits. Celebrated every August in Ukraine as part of a national vyshyvanka day, this garment is so symbolically charged that it is said there that a lucky person is a lucky person. “born in a vyshyvanka”.

At the foot of the podium

In this gloubi-boulga, it is with some astonishment that we distinguish an iconic pair of sneakers. The man on the ground, stuck in this perilous position, wears Puma shoes, Suede model, black. Launched in 1968 to counter the success of Adidas’ Stan Smith, the Suede quickly established itself on the market. It even had its heyday on October 17, 1968, during the Mexico City Olympics, when African-American athletes Tommy Smith and John Carlos waved their fists as a sign of commitment against racism. In socks on the podium, they had taken off their Suede, placed next to it.

The outfit of the two men covered with an incredible mountain of black dreadlocks surpassing our analytical skills, let’s end with a word on the double bass. Colloquially, the musicians call her the “grandmother”. Playing the double bass, in jazz slang, is even said to be “groping the grandmother”. Why such a nickname? The most widespread thesis is that of a reference to the famous tale of musical pedagogy Piccolo, Saxo and company, in which the deep sound of the double bass is the voice of the grandmother.

The gloubi-boulga of Eurovision, it may be a detail for you