The Massacre of Sharon Tate by Followers of Charles Manson is still in everyone’s memory. With each drama perpetrated by sects on the American territory, one refers to it. It almost became a bad habit, resulting in a number of tragedies.

However, that day, it is the shock. It is then November 18, 1978 and 909 people, including 304 minors, have just been found dead in Guyana, South America. Or, according to the FBI, “a veritable heap of tangled bodies, with faces twisted by the pangs of death”.

An aerial view of the bodies of the victims of the Jonestown tragedy. | The US National Archives via NARA & DVIDS Public Domain Archive

All drank Kool-Aid, a fruity drink, poisoned with cyanide; all were part of the People’s Temple (“Temple du Peuple” in French); and all had pledged allegiance to Jim Jones, whose body also lies a few yards from those of his followers.

Just before the tragedy, the guru, who had signed a “death pact” to his many followers, would have convinced them to ingest poison by assuring them that the gesture was the only way to put an end to the war that the American government had just declared on them.

Before being the instigator of what is commonly called “the tragedy of Jonestown”, Jim Jones was simply James Warren Jones, a kid raised in a proletarian family in Indiana, very focused on the fight against the big capital through his mother, a labor unionist. Instead of the communist Little Red Book, James prefers the Bible, however, in which he finds answers to his questions about life, a benchmark capable of leading him to be a better person than his father, who was little involved in his education.

At age 10, in 1941, James joined the Evangelical Charismatic Movement Pentecostal Church in Indianapolis and helped the pastor evangelize the people of the area. His vocation was found: in 1964, James became a pastor and immediately advocated racial equality within a country then agitated by the preaching of Martin Luther King and the civil rights movement.

More disturbing: the man who is now nicknamed “Jim Jones” hires private detectives to collect as much compromising information as possible on the people who can integrate the Temple of the People he has just created in San Francisco . The worm is already in the fruit…

Under cover of advocating equality and fraternity, Jim Jones uses and abuses his authority: he is accused of sexual assault, physical abuse, humiliation and embezzlement of donations received for his sect. Worse still: in 1977, once installed on the agricultural lands of Guyana, not far from the Venezuelan borders, Jim Jones exploits a population in a situation of poverty and forces them to clear daily on the 11,000 hectares owned by the community.

When some members of the community see their state of health weakened, the guru simulates false miraculous cures. When others ask for their money, it simply means that it was used to help the community grow.

In 1977, the People’s Temple still had 1,200 people. And the authorities, following “the tragedy of Jonestown”, would have found there “800 passports, approximately $500,000 in cash and numerous gold bars”.

Today, a number of the items recovered on November 18, 1978 are stored in the Museum of Death, Los Angeles. There, in a specific gallery called “Suicide Hall”, there are press clippings, paperbacks published after the tragedy, and even a business card of Jim Jones from his time at the San Francisco Housing Authority. . Above all, there is a framed copy of He’s Ablea disc at the crossroads of gospel, pop and funk recorded in 1973 by the People’s Temple Choir, autographed by a former member of the sect’s orchestra.

On the cover, we see the musicians and singers dressed in blue uniforms standing by the pond in Golden Gate Park, San Francisco. The atmosphere seems light, peaceful, friendly. Quite the opposite, in short, of the images of the 1978 event that have remained in the collective imagination. On the back, you can even see a black and white photo of Jim Jones and his followers, as well as a note of intent: “Our choir is made up of people from all walks of life. We are dedicated to a common cause: to make the humanistic teachings of Jesus Christ part of our daily lives. Our inspiration is a lifestyle demonstrated by our pastor, James W. Jones.” 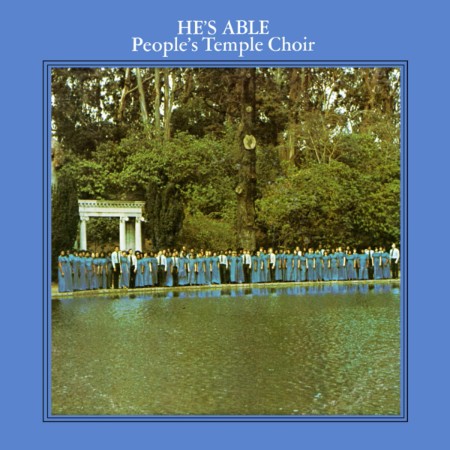 No need, therefore, to have a doctorate in sociology to understand that the guru sees in music a means of controlling his community, at the same time as a way of spreading what he supposes to be the good word around him. .

Former Peoples Temple chorister Laura Johnston Kohl remembers in an interview with Rolling Stone of the importance given to music during services presided over by Jim Jones: “The very first thing we heard was the music, when people sat down. During his sermons, Jim would stop to get the people to sing and play: if he needed a break or felt the people needed to sing and stand up, he would involve the choir again or the group.”

During these ceremonies, gospel hymns resonate above all, even if some contemporary songs are also heard, systematically revisited in substance with the idea of ​​sticking to the ideals of the People’s Temple.

We hear “Something Got a Hold of Me” by Etta James, “Walk A Mile In My Shoes” by Joe South (later covered by Elvis Presley) or “Black Baby”, a remake of “Brown Baby” by Nina Simone performed by Jim Jones’ wife, Marceline: three songs that we end up finding on He’s Able. It would even seem that recordings exist where we hear the People’s Temple Choir cover the Beatles, the Jackson 5 or even George Benson.

To hear former members of the choir, all say that these songs gave hope, that they did not intend to indoctrinate anyone, that they were just having fun and not could in no way suspect that this benevolence contained in He’s Able could turn into such dramatic acts a few years later.

It must be said that these twelve pieces, recorded over two weekends in 1972, ultimately contain nothing to worry about: they are orchestrated covers of old spiritualsgreat gospel classics and some hits from the late 1960s.

Among the mentors of this seminal work, there is Jack Arnold Beam, whose parents joined Jim Jones from the beginnings of the People’s Temple, in the mid-1950s. At the time, the young man, passionate about rock , plays the piano in hotels and nightclubs on the west coast, and would like to take the creative gesture further. His goal? Study music. That’s good: the Temple offers to pay her university fees.

In 1969, he moved to Ukiah, California, where the sect was based. He stands out with his leather jacket, joins the choir and instills in the guru’s head the idea of ​​an album. According to him, this would have two interests: to highlight the sermons of the community and to generate income for the church.

At the end of 1972, the People’s Temple Choir took over the Producers Workshop in Hollywood. None of the members had ever set foot in a studio, nor had the opportunity to record any song. The budget is tight, the space is narrow, limiting the sessions to around thirty people, but the album takes shape quickly, fueled by some original compositions by Jack Arnold Beam, in particular “Set Them Free”, where his sister provides the main song, “Because Of Him” or even “Hold On, Brother”, with very soulful inclinations. On He’s Ableit is even possible to hear Jim Jones during a “Down From His Glory” where his megalomaniac inclinations seem obvious: “From the height of his glory, I am God”.

Backed by Brothers Records, the People’s Temple Choir released 40,000 copies of the album, which they sold for $10 each in churches where services were offered. Alongside the disc are also keychains, photos of Jim Jones and holy oil supposedly produced by the guru. Jack Arnold Beam then understands that his mentor, whom he nicknames “Father”, is more and more intrusive. At Rolling Stone, he declares: “I have seen years of paranoid and tyrannical personality behavior build up in Jim, and I have decided not to be associated with it anymore.”

Logically, he ended up leaving the People’s Temple, where the other members of the choir (Deanna Wilkinson, Ruth Coleman, Shirley Smith and Loretta Cordell), remained faithful to Jim Jones once the move to Guyana was made in 1977, in the idea of ​​fleeing increasingly negative media coverage, all perished in the tragedy of 1978.

Cover of the album reissued in 1993. | Screenshot TROGLODYTENANMERKUNG through YouTube

Could they have guessed what would happen? It’s unlikely. Still, during the reissue of He’s Able, in 1993, now adorned with a cover where we can clearly see the corpses of Jonestown, the Gray Matter label had the (unhealthy?) idea of ​​including a forty-minute piece as a bonus. Entitled “Mass Suicide”, this title was recorded on November 18, 1978 and allows Jim Jones to hear his disciples urging suicide. After that, hard to see He’s Able a simple unifying album, where everything would be love and benevolence.

The descent into hell of Jim Jones, author of a gospel album, which led 909 people to death