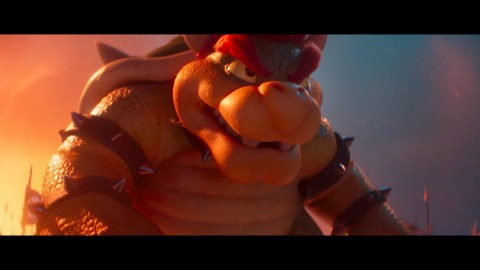 For a long time, the prospect of a new movie featuring the Super Mario universe wasn’t the sort of thing that could thrill viewers. And yet! With the reveal of the very first trailer, just seeing Bowser, Kamak, Toad and, of course, Mario has turned the modern internet upside down! To make matters worse, Jack Black, the interpreter of the King of the Koopas, may have slipped a clue on the content of the animated film!

The Super Mario Bros movie is shaking the planet!

During the last third of September, we finally learned that Super Mario Bros movie. was going to be publicly featured at the Comic-Con event At New York. The most fervent admirers of the license therefore waited impatiently for D-Day, but the big reveal – which took place last night around 10 p.m. French time – did not only win over the fans of the first hour! Since last night, the “Mario mania” is in full swing and the reactions that dot the Internet are very enthusiastic at the sight of these first minutes. Between Chris Pratt who said he was “blown away” by this extract and visuals on the run for a few days, there was indeed something to be confident about!

From now on, the hardest part will be to wait until the release in cinemas because it is not yet for right away. However, thanks to Nintendo, we were still able to have a date that we hastened to tick on the calendar: March 29, 2023 ! Until then, we can expect the cast members to follow one another during the film’s traditional promotional campaign, which will allow us to learn about it bit by bit and satisfy our impatience before discovering all along -feature produced by Illumination Entertainment, the creators of the minions. After the interpreter of Mario – who is none other than the bankable Chris Pratt (Guardians of the Galaxy, Jurassic World…) — it’s the turn of Jack Black, the English voice of Bowser, to do a kind of teasing on the content of the film.

Mario, Luigi, Peach, Toad and Bowser on their way to Broadway?

As said before, this world revelation of the animated film Super Mario Bros. intervenes within the framework of the Comic-Con of New York. To this end, some cast members are on site and lend themselves to the exercise of questions and answers, in particular Jack Black. The actor allowed himself a small allusion to his work as a voice actor which could corroborate the first information – which remains to be confirmed, however – on the animated film. Last May, we relayed to you one of the potential surprises of the film, namely that it could have a very musical aspect according to the first feedback from test screenings!

I actually brought some of my heavy metal roots (Jack Black is one of the band members Tenacious D and lent his traits to the hero of the game Brutal Legend) (…) Bowser is kind of like a heavy metal rockstar, a big, loud, scary rockstar (…) I think you’ll be surprised to see that Bowser has a musical side (…) After the movie came out, he I might take it to Broadway.

With this declaration, Jack Black revives the rumors on the musical side of the animated film which will not fail to make fans even more curious than they have been since the release of the trailer. To bounce on the words of the actor, the first information of the time reported ” a handful of songs » in the feature film one of which would feature Bowser pushing the song and describing his early years and his ambition to take over the Mushroom Kingdom from the public.

About Super Mario Bros. the Movie