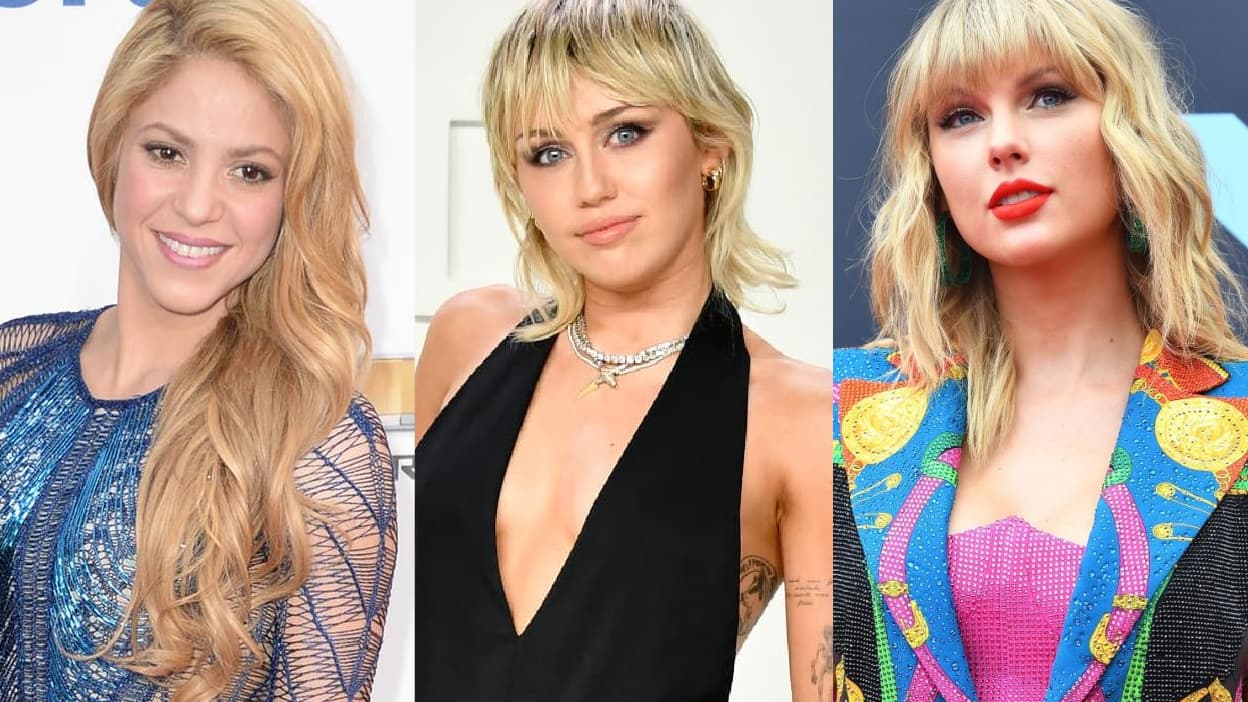 The settling of musical accounts, an exercise to which the stars of world pop willingly lend themselves, is being emulated more and more. The result is open-hearted ballads, revengeful texts and, almost always, fallout in the tabloid press.

Busy weekend for abused women. Since Friday, social networks have been delighting in new songs from Miley Cyrus and Shakira, messages addressed in a barely veiled way to their respective exes. With these songsFlowers for the premiere, and an untitled track published on Argentinian DJ Bizarrap’s YouTube channel for the second), the two stars are part of a tradition dear to the world pop scene: that of settling scores in song.

Because before Miley Cyrus and Shakira, there was Beyoncé, Taylor Swift, Olivia Rodrigo, Pink… all of them have achieved worldwide success by singing their bitterness, their anger or their sadness in songs directly inspired by their love experiences. Without ever betraying the anonymity of the main interested parties, but always leaving just enough clues in their texts for their fans to spread theories on the internet. The result is artistic productions with assured celebrity repercussions, for better or for worse.

Bile and millions of views

For Shakira, there is no doubt: Colombian singer and footballer Gerard Pique announced their separation last June, after twelve years of relationship and two children. Very quickly, the tabloid press lent infidelities to the Spanish athlete, now in a relationship with the young Clara Chia. Both are not spared by Shakira in her new title, which has racked up 123 million views in four days:

“You left me the mother-in-law for a neighbor, with the press at the door and debts to the taxman”, loose the interpreter with more than 60 million albums sold. “I was too big for you, now you have one like you (…) you changed a Ferrari for a Twingo, a Rolex for a Casio”.

Cornered, and despite his less than stellar position as an unfaithful father, Gerard Piqué has since been relying on humor. In response to this murderous rhyme, the footballer announced a partnership with Casio and appeared at the wheel of a Twingo, as reported SoFoot.

With Flowers, Miley Cyrus has shown (a little) more subtlety to address his former companion. This pop track with disco accents recounts a universal experience: that of regaining self-esteem after a disappointment in love. But the former Hannah Montana interpreter has disseminated enough clues for her audience to understand that she is talking about Liam Hemsworth, who shared her life for ten years until their breakup in 2019.

Starting with the release date of the single, January 13, the birthday of the actor of The Hunger Games. On Twitter, fans are raising other references: including the Saint Laurent dress she’s wearing in the clip, a brand the couple are said to have often adopted during their red carpet appearances.

The winks would be found even in the melody of the piece. Many Internet users have pointed out its similarity with that of When I Was Your Man, a song by American artist Bruno Mars. He sings about his regret at having lost a companion whom he did not treat as she deserved. In Flowers, on the other side of the chessboard, Miley Cyrus regrets not having been the subject of the attention that she desired. And when Bruno sings “I should have bought you flowers” in his chorus, Miley responds in hers: “I can buy myself flowers”.

Could the fact that the only known video of the (brief) marriage of Miley Cyrus with Liam Hemsworth precisely shows the two lovers dancing to a Bruno Mars hit be a coincidence?

On the downside of being suspected of sleeping with Jay-Z

But Shakira like Miley Cyrus look like little players against Beyoncé who, in 2016, devoted an entire album to infidelity (then supposed) from her husband, Jay-Z. Against a backdrop of Afro-feminism and a tribute to black American culture, the 12 songs that make up the disc Lemonade detail all the stages of a romantic betrayal, from discovery to reconciliation.

Since the singer and rapper have been one of show business’s hottest couples for 20 years, fans didn’t have to think long about who the caustic lyrics of Lemonade were addressed. But a rhyme was accompanied by very real consequences, which acted as a reminder of the limits of this artistic exercise in the age of social networks. It is in one of the singles of Lemonade, sorrywhere Beyoncé swings:

“He only wants me when I’m gone / Phones his well-groomed Becky”.

Immediate earthquake within the “Beyhive”, the community of Beyoncé fans. Like a single internet user, millions of Twitter users set off in search of the mysterious Becky… and soon find someone to fight to defend the honor of their idol.

Listening only to their anger and unfounded rumors, it is on fashion designer Rachel Roy that they pour out their wrath. This then becomes the target of violent cyberbullying, fueled by the silence of Jay-Z and Beyoncé. Internet users’ attacks extend to Rachel Roy’s then 16-year-old daughter, as reported The Cut at the time. So much so that the designer had to publish an official press release to ensure that no, she never slept with the American rapper.

Despite the media coverage of Lemonade, it is undoubtedly Taylor Swift who would win the game of settling musical scores: throughout her 17-year career, the 33-year-old singer has never ceased to draw inspiration from her experience to write her songs, essentially centered on disappointed loves. And because the young woman has often dated famous men, her albums have always been the subject of people reviews by her fans and the tabloid press.

The one who has almost always imposed herself as a golden rule never to reveal explicitly who her texts are addressed to has become a master in the art of disseminating clues in her words. The examples are legion on the ten albums which constitute his work, and that of the piece last kiss takes full account of the circuitous paths it takes.

In 2008, when she was barely 18 years old, Taylor Swift revealed on a tv set that singer Joe Jonas ended their relationship over a “27-second” phone call. Two years later, the artist unveils the album Speak Nowon which appears last kiss, melancholic chronicle of a disappointed love. And his most observant fans immediately notice that the introduction of the song lasts, very exactly, 27 seconds. What deduce that the title was inspired by his breakup with Joe Jonas.

If these treasure hunts have enabled the young woman to forge an unbreakable bond with her audience – evidenced by her sales figures, which are always more consistent from one album to another – they have also earned her to be the favorite target. celebrity media for years. Critics now happily praise her talents as a songwriter – she is the only woman in history to have won the Grammy Award for album of the year three times – but the singer has long been presented as the he archetype of the former girlfriend to be avoided, the one who inevitably throws her vindictive gall all the way through CDs.

Taylor Swift has been emulated. From Conan Gray to Troye Sivan via Phoebe Bridgers, a slew of young English-speaking artists claim his work as a source of inspiration. But its proper heiress is undoubtedly Olivia Rodrigo, who swept away all the competition with her debut album, sourreleased in 2021. Carried by planetary tube Driver License, the disc is full of break-up songs, sometimes melancholy, sometimes overexcited. After a quick investigation, fans of the 18-year-old star deduced that she was singing about her resentment towards singer Joshua Bassett.

From Twitter messages to TikTok videos, admirers are turning against this one and against Sabrina Carpenter, a third starlet, suspected of having stolen the handsome boy from the unfortunate Olivia. But the two vilified artists quickly found a way to bounce back… in music: one with a song called Lie Lie Liethe second in the piece skin, two titles whose cryptic texts sound like direct answers to Olivia Rodrigo. This love triangle has delighted their young fans and boosted three careers at once.

These songs-attacks, if they seem to have multiplied in recent years, are nothing new. Already in 1978, singer Marvin Gaye devoted his entire album Here, My Dear to his divorce from his first wife, Anna Gordy Gaye. The French song is not left out: throughout the 1970s, Michel Berger and Véronique Sanson maintained a musical correspondence after their breakup, in emblematic songs such as Will you be There?followed by I will be thereor The Redoubtable.

“A sexist point of view”?

If the men lend themselves to the game, how is it that history only seems to remember the pieces signed by women, and often against them? On this, Taylor Swift has her idea:

“Some people will see the depth with which you have crafted a song, they will see that you put your emotions into it, that it has value, and that it is positive and sincere,” she said. on Australian radio 2DayFM in 2014. “Others will say, ‘She just writes about her exes!’. To me, that’s a very sexist point of view.”