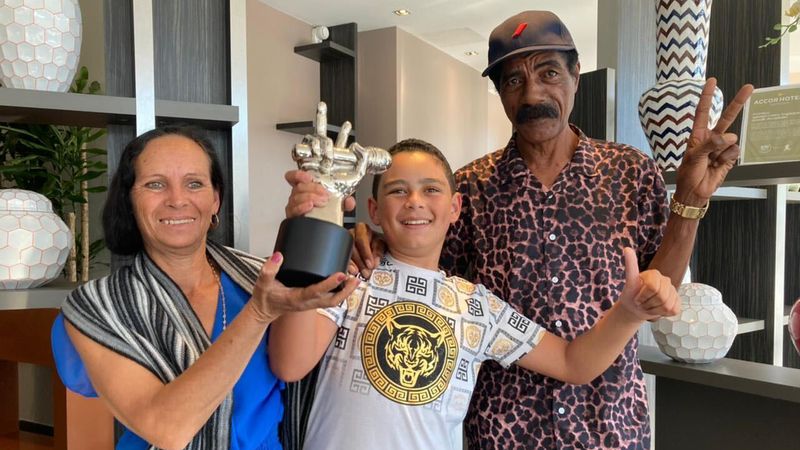 “I am proud to represent Reunion Island,” Raynaud Sadon told Réunion La 1ère the day after his victory at The Voice Kids. The young man from Reunion has always dreamed of becoming a singer.

At only 11 years old, the young Raynaud Sadon already has everything of a big star! The kids from La Plaine des Cafres won the final of a famous telecrochet show on Saturday evening. The singer with the golden voice moved the jury and the viewers with his cover of “Puisque tu pars” by Jean-Jacques Goldmann.

Asked live in the Réunion La 1ère newspaper, this Sunday, October 9, he confided how happy he was with this victory. “I’m very happy, but I don’t realize yet“, did he declare. “My whole family is happy and I am proud to represent Reunion Island“.

“Even if I hadn’t won, I would still have been happy because being in the final is really something incredible! Me, I wasn’t looking for victory, I sing with the heart, that’s what really matters“.

The report of Réunion La 1ère:

The reaction of Raynaud Sadon and his parents after the victory

And Raynaud Sadon is the pride of his family, at the Plaine des Cafres. “We always believed in him since he was little and today it paid off, reacts Jérôme, one of his brothers. “He has had a very good career: it started with the music festival, about four or five years ago, he was very young and it was his first competition. Today is one of his dreams come true“.

Without having ever taken any singing lessons, Raynaud Sadon has perfected his voice over the karaoke sessions and radio hooks in which they have participated regularly since he was 8 years old. And thanks to this new notoriety after his victory, the teenager hopes to get closer to his goal. “For me, my singing career is starting, it’s incredible!“.

Raynaud Sadon savors his victory accompanied by his parents, Nelly and Dominique

A fan of French song like Raynaud, Patrick Mésère can testify to the determination due to the teenager he met with his parents Nelly and Dominique at karaoke. “He really lives for the music. He does all this to give emotions to people“.

Review the interview with Patrick Mésère on Réunion La 1ère:

At 11, Raynaud also surprised his audience with his repertoire of “old school” songs, but always interpreted with accuracy. He began the adventure by taking over “Goodbye my love, goodbye” by Demis Roussos, of whom he has always been a fan or even “Chiquititaby Nana Mouskouri.

“He has choices that are indeed very atypical in terms of music, but what makes a lot of difference is his charisma.“, believes Patrick Mésère.

And he was able to move viewers with “Live for the best“by Johnny Halliday.”It is clear that something happened at that time and the machine was launched. We saw that there was really an innate talent in this child“.