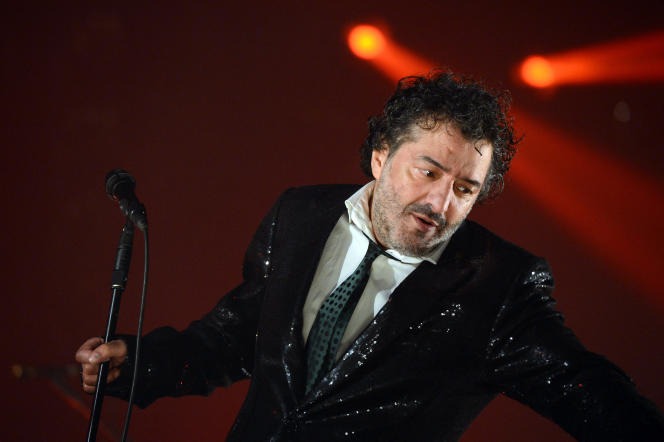 Philippe Perrin still remembers the place of his meeting with Rachid Taha: on the threshold of the Bains Douches, where the doormen blocked the entrance to the young Algerian singer. To do justice and homage to the founder of Carte de séjour, who died in 2018, the sculptor decided to open wide the doors of the Saint-Ouen flea market to him and mobilized around thirty artists, close friends or former fans. The exhibition at the Galerie Dauphine, entitled “Rock el Casbah”, from the title of one of his hits, an adaptation in 2004 of the eponymous piece by Les Clash, addresses political subjects, questions of nationality and those of the condition of immigrated to France, very present in the texts of the musician.

Read the obituary: Article reserved for our subscribers Rachid Taha, the raï punk, is dead

This kind of commemoration often gives rise to stuffy demonstrations. This one is, on the contrary, almost joyful and playful, like one of the two works hung by Perrin himself, Ritaa contemporary variation to the tune of the “catalogue” of lovers of Don Giovanni of Mozart. Here, all the visual arts come together. Photographers Pierre Terrasson and Marc-Antoine Serra show portraits of Taha, Robert Combas painted one for the occasion. Also a war photographer, Enrico Dagnino introduces the tragedy of religious wars, in a few images of the civil war in Somalia. The close-ups of faces and bodies or pencils and inks on blood red paper by Myriam Mechita, the assemblages of debris arranged in a cross by Alan Vega and the macabre drawings, despite their lightness, by Jean-Luc Verna are the other moments tragedies along the way.

But it is in more allusive and ironic forms, cultivating the absurd and black humour, that most of the works take up political and religious subjects. On the metal capital letters of the most beautiful advertising effect which form the word “BANK”, Renaud Layrac plants metal rods intended to prevent pigeons from landing. Questions of money and advertising again: the scarlet djellabas with the Nike or Adidas logo by François Curlet is answered, at the other end of the room, by the collection of T-shirts designed by Ali Guessoum. He hijacks advertising or cinematographic logos, like this Malbaré, racism kills parodying the packets of a well-known tobacco company.

Discreetly, Saâdane Afif deposited on a cover of Sweet France from Charles Trenet a golden Fatma hand pendant, and that’s enough, for whoever remembers the words of the song covered by Carte de séjour. Just as Djamel Tatah, another longtime friend of the singer, just needs a small oil on paper, a head painted in 1985, to remember the time of their debut.