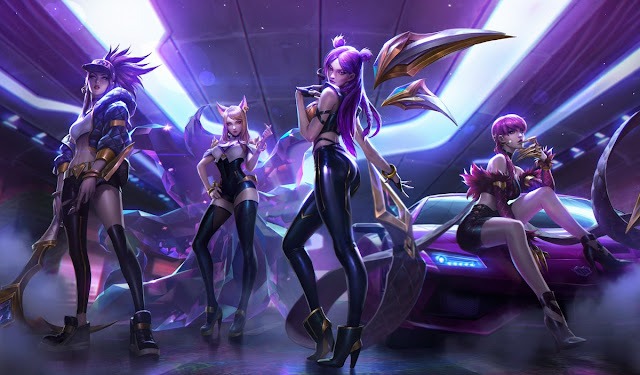 news culture LoL: what is the KDA phenomenon, the virtual K-Pop group that caused a sensation in video games?

You have surely not missed this very ambitious virtual music group that is K/DA. This K-pop girl band shook both the players of the famous moba, but also the world of music, which was not expecting such a sensational debut. A look back at this group that knew how to merge video games and K-pop.

To be quite precise, the term K/DA is a data that allows players to
League of Legends (Lol) to measure their performance in game. This is the addition of the number of enemies killed (Kill) and the number of enemies you helped kill (Assists) divided by the number of deaths (Death )…. But let’s not get lost! K/DA is a virtual K-pop group that takes its name, like a nod to Lol fans, from this statistic. Created in 2018, this girl band is made up of only 4 playable moba characters: Ahri, Evelyn, Akali and Kai’Sa. Real singers embody the characters by interpreting the music. Evelynn had the voice of the American singer Madison Beer for the songs Pop/Stars and More then was replaced by Bea Miller. For Kai’Sa, it’s Jaira Burns who starts with the first two songs to be also replaced by another singer: Wolftyla. As for Akali and Ahri, they are still followed by the same South Korean singers: Soyeon and Miyeon from the K-pop group (G)-Idle. However, the singers have already been changed to some music from their mini-album (EP) “All out”, which suggests that the real people embodying their voices could change regularly on certain occasions. The music videos exclusively show the dancing 3D-modeled characters moving like real singers. A few concerts took place and these were the real singers who were accompanied on stage on video and on the big screens by their avatars.

Is the group K/DA really K-pop?

Due to its composition, half by South Korean singers and the other half by Western singers, the subject of whether this music group can be considered K-pop has often been raised. Some fans express that this is not the case due to the fact that K/DA was created by an American company and half of the members are non-Korean. Others believe that making K-pop isn’t just about the origin of the members and the production. The only answer we can get is from different Riot employees. Whether it’s for Patrick Morales, Riot’s creative director, composer Sebastien Najand (the POP/STARS song) or Viranda Tantula (creative director at the time)… it’s unanimous: K/DA is not supposed to be a K-pop group. They were greatly inspired by K-pop in the musical style, but also by pop in general.. Riot wanted to create a musical mix that will appeal to everyone, without wanting to put themselves entirely in a box. K/DA brings out a lot of aspects of K-pop (clips, choreography, lyrics…) but does not define itself as such.

That doesn’t stop fans from supporting these virtual idols as if they were an authentic K-pop group. As is often done in the Korean music industry, K/DA gave a name for their fans: “Blades” and has a lightstick (a luminous stick whose design is unique to each K-pop group, which is used to be waved in rhythm at a concert). Each member has its own personality as well as distinct functions. For example, Ahri is the leader of the group and is the lead vocalist. There are even fan names for each of the members, like the Deeva who are Evelynn’s fans.

Why was the K/DA virtual group created?

Riot is not at its first attempt when it comes to the music industry and their universe. Each year, the North American company collaborates with music groups to celebrate the opening of their major world championship and create an annual anthem. Always more ambitious, Riot did not stop there. Highlighting the potential and influence of this extremely popular game highlighted the creativity that characterizes this company. The proof, although the skins of Lol are mainly a way to have a different appearance for a character, they also tell a story. Fans got used to the great music videos, for example, with the introduction of the Jinx character in 2013. So it’s no surprise that Lol gamers got to see all the characters with a Pentakill skin form a metal band. and release a mini-album. An experience so positive and enriching that there was, once again, no question of stopping there for Riot.

It should be noted that Koreans are particularly fond of League of Legends. South Korea is home to a massive number of LOL gamers with a highly developed esports scene. The best Lol player in the world, according to many fans, is Korean and is called Faker. So when Riot discovered the world of K-pop, this project immediately made sense to them. The ideas came together very quickly and were based on Arhi’s popstar skin released in 2013. It seemed obvious that this character would be the leader of the group. Everything was built around Arhi quite quickly.

K/DA allowed Riot to tap into its universe and connect with fans. They used an elaborate transmedia that allowed them to reach an extremely wide audience: South Korea, K-pop fans and pop music in general. This flamboyant musical project also brought characters to life by bringing them closer to reality. Besides being a virtual music group, the K/DAs have also given interviews, shot videos and collaborated with luxury brands. Riot doesn’t just sell skins with this band, it’s created a whole universe around this band that runs on fans. Many derivative products are always available in order to show his devotion and his love for the group.

The future of the K/DA group

Currently, we are not safe from a comeback of the group in 2023, as the many fans located in the four corners of the globe hope.. We were able to see new ways of portraying the characters of the K/DA group, especially from Séraphine’s point of view. This virtual singer who has collaborated on several occasions with the group, has used social networks to show her daily life. We were able to see the group on several occasions, as if they really existed, so impressive was the natural staging effort.

K/DA, in addition to being a gift for fans of all kinds, is an extremely profitable tool that only increases the already gigantic horizons of this legendary video game genre that is League of Legends.

LoL: what is the KDA phenomenon, the virtual K-Pop group that caused a sensation in video games?