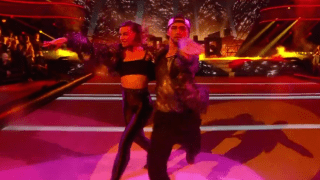 By dancing a samba to the hit “Everybody” by the Backstreet Boys, Billy Crawford once again flew over the number of “Dancing with the Stars” broadcast on Friday October 14.

TELEVISION – It was the perfect combination to be sent back more than twenty years. This Friday evening, October 14, on the occasion of the sixth prime of Dance with the starsseason 12, Billy Crawford once again shone, carried by a hit that smelled good of the 1990s: “Everybody” by Backstreet Boys.

Indeed, while the candidates still in the running had worked their choreography blind and only discovered the track they were going to dance to a few minutes before going on stage, the Filipino singer and his partner Fauve Hautot were fortunate enough to come across a song that suited them perfectly.

Billy Crawford dancing to the Backstreet Boys at #DALS12 Me:

#DALS “I found it EXCEPTIONAL!” The jury and the public are asking for more! ❤️‍🔥

Not embarrassed for a moment by the fact of having to offer a samba on a piece between pop and hip-hop, they thus amazed the jury like many viewers. Among the jurors, Bilal Hassani and Marie-Agnès Gilot, who almost regretted not finding the slightest reproach to make, notably awarded them the maximum score of 10. And Camille Combal went one better with a new nickname: “ Billy too loud “.

Logical when you know the similarities between the style of Billy Crawford, revealed in particular by his title “Tracking” in 2002, and that of american boy band whose song ” Everybody was one of the biggest global hits in 1997.

Reading the social networks, some viewers had the feeling of witnessing an obvious combination between a candidate who is already flying over the show and a title that suits him perfectly.

Poor Thomas with this remixed song! Double dance double technique while he is already struggling! Right after t…

Billy dancing to the Backstreet Boys??? No it’s too much favoritism there, give him the trophy directly in this case 🙄 #DALS12

Especially since other competitors have not been put in such good conditions, far from it. Already struggling technically, actor Thomas Da Costa, for example, had to present his samba on a dragging techno remix of 50 Cent’s “Candy Shop”. And it was even worse for Anggun, finally eliminated on Friday night, who found herself dancing her quickstep to “I’ll Be There for You” by The Rembrandts, the theme song of Friends.

Far from obvious associations that some would have liked to see the big favorite of the season face, just to perhaps consider him at least once in difficulty.

See also on The HuffPost:

In “DALS”, this dance by Billy Crawford delighted those nostalgic for the 90s