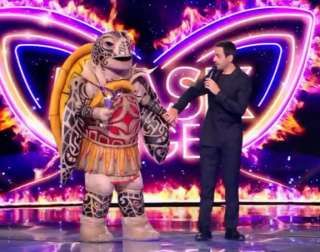 The turtle won the 4th season of “Mask Singer” on TF1.

Hidden under the costume of the tortoise, it was the 33-year-old Norman tenor Amaury Vassili who imposed himself, chosen by the public.

Often presented in the media as the youngest tenor in the world, he notably performed Writing’s on the Wall by Sam Smith in the last performance.

He succeeds Laurence Boccolini as a unicorn, Larusso as a penguin and Denitsa Ikonomova in butterfly, the winners of the first three editions.

The character of the turtle had given a lot of trouble to the investigators of the jury composed of Kev Adams, Vitaa, Chantal Ladesou and Jeff Panacloc.

Among the clues revealed about him, we knew that he had played in the same theater as the investigator Chantal Ladesou and that he was close to Florent Pagny. He had also accumulated quite a few titles and considered himself self-taught. The turtle also had a tattoo.

In the costume of the elephant, the singer Keen’V revealed himself without much surprise, he who was approached from the first prime time.

“I had a great experience”, rejoiced the one who finishes second, even if he regrets having been recognized from the start. For this last evening, he notably sang Say You Won’t Let Go by James Arthur.

His clues? He was a regular at haters and he sometimes had missed appointments with his audience. On his phone, a photograph of a trophy from the NRJ Music Awards had been unveiled and under her costume was hidden the number 987, “ three numbers that make you travel”.

Finally, before that, in third position, it was the Olympic boxer Estelle Mossely who had unveiled herself in the costume of the bride. The suspicions of the jury had been amplified from week to week on his identity.

A key clue had been unveiled during the season to unmask her: a ring with 2010/2016 written was on her finger. This corresponded to when the boxer joined the French boxing team in 2010 and when she became the first French boxer to win the Olympic title in 2016.

Find out who won “Mask Singer”, hidden in the turtle costume