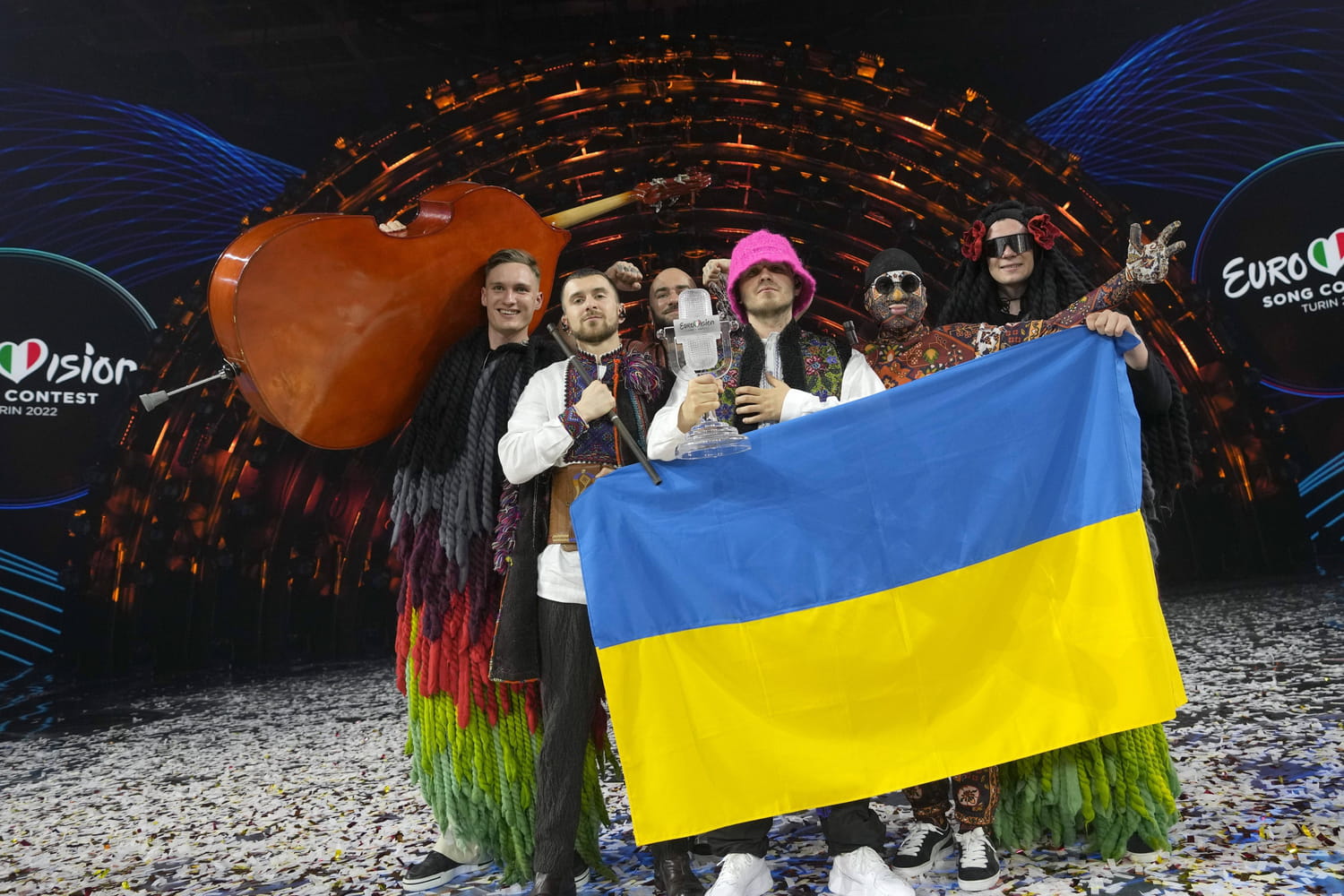 EUROVISION. The group Kalush Orchestra, which represented Ukraine, was crowned winner of Eurovision 2022. Their portrait and ranking.

We expected it, but France was not crowned big winner of Eurovision this year. At the end of the count, France won 17 points. Not enough for the victory therefore, since it only rose to the penultimate place, ahead of Germany.

06:46 – Relive the best moments of Eurovision

Ukraine won Eurovision and climbed to first place in the rankings with 641 points. On the podium, we then found the United Kingdom and Spain, who respectively had 466 and 459 points. They overtook Sweden and Serbia.

06:14 – Who is Kalush Orchestra, the winning Ukrainian band?

Kalush Orchestra is a Ukrainian group that won Eurovision in 2022. It was formed in 2019 and released two albums before being named the big winner of this 66th edition. After the singing competition, the members of the group will return to their countries to join the forces fighting against Russia. One of them stayed in Kyiv to defend the Ukrainian capital.

It is a victory that is not a surprise. Announced favorite for several weeks, Ukraine won Eurovision this Saturday, May 14, 2022. The victory was won by the rap group Kalush Orchestra, who performed the winning song “Stefania”.

END OF LIVE. Ukraine won Eurovision with the title “Stefania”. This song is a tribute to the mother of the singer of the group. But the colorful songs offer a new interpretation grid to this piece, Ukraine being able to be perceived as the maternal figure evoked in the song. Ukraine’s victory is therefore highly symbolic for the country invaded by Vladimir Putin’s troops. Below, relive Ukraine’s performance at Eurovision.

Kalush Orchestra brought victory to Ukraine in this Eurovision 2022. The group formed in 2019 before releasing two albums in 2021. They performed their title “Stefania” on the Turin stage, a tribute to the singer’s mother but also to Ukraine perceived as a maternal figure , while it is currently at war with Russia.

Ukraine was crowned big winner of Eurovision 2022 with 631 points, thanks to massive support from the public. It is ahead of the United Kingdom (466 points) and Sweden (459 points). France, meanwhile, finished second to last with 17 points.

Ukraine’s victory at Eurovision is highly symbolic for the country. The singer of Kalush Orchestra thanked the organizers and the public for their support, before releasing a resounding “Vive l’Ukraine” which was widely applauded by the public.

With 631 points, Ukraine was crowned big winner of Eurovision 2022. Kalush Orchestra offers the third Eurovision victory to his country.

Spain obtained 459 points in total, which does not allow them to overtake Ukraine and their 631 points. We are still waiting for the points of the United Kingdom and Sweden, which can still overtake Ukraine in the ranking.

Ukraine was expected to be the big favorite for this Eurovision 2022, with particular support since the country is at war with Russia. The public gave 439 points to Ukraine, which puts the country in the lead. This is a record in the history of Eurovision, no country has ever obtained so many points from the public. In total, Ukraine has 631 points.

Serbia wowed audiences with their socially-engaged song about public health and hygiene. She leads the standings with 312 points. We do not yet know the number of points awarded to the United Kingdom, Switzerland, Spain or Ukraine, the big favourites.

00:49 – The last known countries of the ranking

We know the countries that are in last position in the Eurovision 2022 ranking. Germany is last, with only 6 points, and France penultimate with 17 points. They rank behind Romania, Belgium, Armenia, Finland, the Czech Republic and Iceland.

The allocation of public points can change everything, and Moldova has proven it. The country obtained 239 points from the public, which allows them to climb to third place with a total of 253 points.

France was represented by the Breton group Alvan and Ahez at Eurovision 2022. There are four members of this formation: the female trio Ahez Marine Lavigne, Sterenn Diridollou and Sterenn Le Guillou and the musician Alexis Morvan-Rosius, known as Alvan. They were selected on March 5, during the program “Eurovision France: it’s you who decide”. The tricolor group performed on the Turin stage the song “Fulenn”, which means, in Breton, both “spark” and “pretty girl”. With 17 points, Alvan & Ahez finished in 24th place out of 25 in the Eurovision Song Contest 2022. It has been since 1977 and Marie Myriam’s victory that France has not won Eurovision.

Who won Eurovision 2022? Broadcast live from Turin on Saturday May 14, 2022, the Eurovision final gave the opportunity to 25 countries to shine but it was Ukraine which obtained the most points from the participating nations. Then followed, the United Kingdom in second place and Spain to finish the podium. France, meanwhile, only got 17th place.

Below is the ranking of the nations that received their full point. This ranking is provisional for the moment.