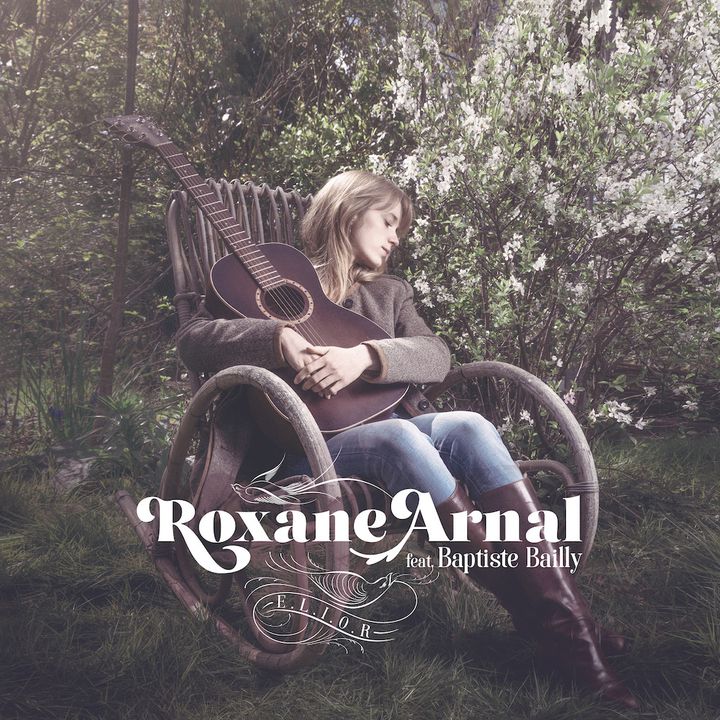 We discovered Roxane Arnal in 2017 in the duo Beauty and The Beast that she formed with Michel Ghuzel. At the height of her 22 years at the time, she already ensured a great mastery of guitar, bass and singing, both solo and in vocal harmonies. And to top it off, she was also an actress.

Her meeting with Baptiste Baily in 2018 pushed her to go solo. A P Doorways was released in October 2020. It felt even more elaborate writing and composition, which escaped from the country-western-swing style of Beauty and The Beast. Mixtures of influences ranging from folk to jazz through atmospheres bordering on progressive rock, with changes of musical atmospheres within the same piece.

During a meeting in June 2021when the concerts resumed after confinement, the young singer-songwriter entrusted us with the preparation of an album “in the continuity of the EP”.

Indeed, this EP had made us hungry. Listening to the main course coming out this October 7, we confirm: Elior is the perfect extension of Doorways. Of the twelve tracks on the album, three are from the EP: Rushed to Fly, No One Knows My Name and Give It All Away. The pieces have been rearranged and re-recorded, but we find the same sensations, the same thrill when listening to the soft voices of Roxane and Baptiste which go together wonderfully, the hushed orchestrations but which sometimes “send heavy” without warning, as for example in the central passage of Rushed to Fly. As for the new songs, they breathe an airy and intoxicating folk like the very beautiful Little Birdthe first single from the album released in early June.

“September without rain” sings a song on a jazz-blues mode with dobro in slide, while another addresses the theme of wandering “on the road” in a very country atmosphere on a ballad with catchy acoustic arpeggios Everybody’s Talking. The themes often appeal to reverie, to the imagination. Paint my song for example is “an invitation to the listener to paint my song, to decide the words of the song and the meaning the music has on them”, explains Roxane.

I have a relationship of both conflict and love with words because I’m always afraid of misusing them.

Words in English, because “the music that has always rocked me is American music”, recognizes Roxane. “I have melodies that have American rebounds in the phonemes”. She adds : “But sometimes I go to styles of, for example, waltz or French romantic heritage. And in this case, I write lyrics in my mother tongue. For now, I keep them in drawers for other occasions…”

And just as was already the case on the EP, the musical colors are not limited to the voice-piano-guitar-acoustic formula. Although the first title I’ll Fly Away (that we had already heard in a first version on the singer’s YouTube channel) seems to start in a borderline bluegrass atmosphere, the rest of the piece takes us to jazz territories, and its finale mixes sometimes almost dissonant piano and roaring electric guitar.

Even if the album is released on the Dixie Frog label rather labeled blues, the overall color very often bathes in an acoustic folk softness like the second single come back to me, released last week. A piano ritornello that no longer comes out of your head and a ballad that gives the impression of floating in the wind.

This skillfully balanced cocktail, between Baptiste Baily’s incursions with jazz-rock accents and Roxane Arnal’s more folk-blues touch, brings to the ears both feelings of familiar terrain and surprises in almost every piece. The harmonic progressions always end up at one time or another by going where you don’t expect it, while remaining extremely pleasant to listen to. The mark of great musical mastery. And it works perfectly live. At the beginning of the summer, the New Morning audience had the privilege of hearing songs from the album before its release, such as Be The One You are and his superb bluesy guitar:

Roxane was first drawn to music, then dance. Comedy came about almost by chance. “It was out of necessity to work on my diction, my memory, my shyness, to release emotions… and chance led me to shoots” . Several roles in cinema and television since 2014, and recently the actress was on the bill of Incredible but true by Quentin Dupieux, where she plays the character of young Léa Drucker.

This duality inspires bridges between the two arts. “Yes there are links between the two”, she confides. “In both cases we express emotions, but not from the same place”. She specifies: “For me, music comes from outside, a bit like something divine, and which does not require a lot of energy. In the theater we simply have our body. It is an instrument that we must consider, treat, listen, work, and it is from nothingness that we will draw emotions, that we will summon them. It is something quite strong, it makes us motor of our form of expression. And everything it enriches the music naturally.”

The album “Elior” available on October 7 at Dixie Frog. The release party will take place on January 19 at the hermitage (Paris). A tour will follow in early 2023. Find all the dates on the official site or the Facebook page.