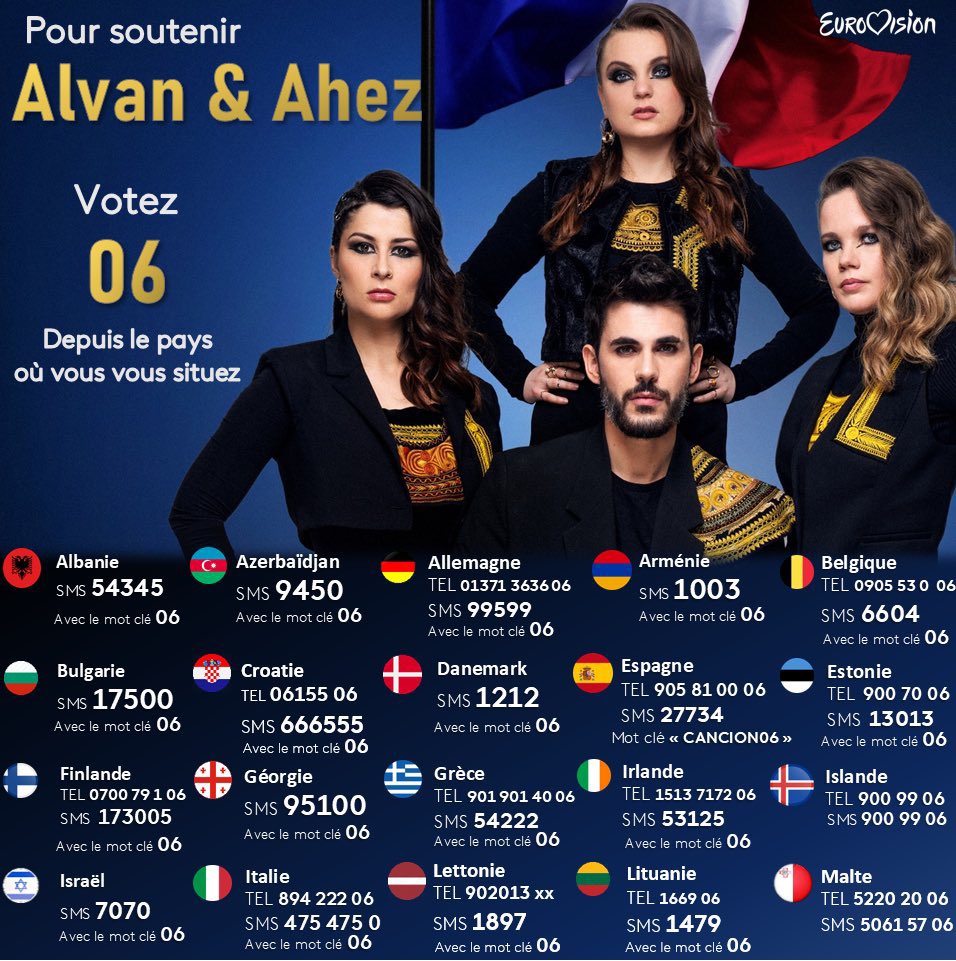 Find here all of our live #EUROVISION

9:29 p.m. : Too bad After Romania and Portugal already two countries with wonderful languages ​​that sing in English

9:28 p.m. : Pierre, let’s be honest, we will never reach the level of Lordi again. The most magical moment in my opinion at Eurovision. WTF. Me metal fan, it was an intense moment.

9:28 p.m. : The Rasmus, you know? One of their previous songs had become the credits of the cult show “On n’est pas couche”.

9:28 p.m. : Breaking news, it’s not just France that pays tribute to Brittany! Finland too, with the yellow raincoat of the group The Rasmus, a direct reference to the climate of this region (and good evening to you Bretons, it’s a northerner who’s kidding). Let’s hope for this tonic song that the “twelve points” will rain like drizzle on Quiberon.

9:25 p.m. : A little late, Clément Beaune, the government’s Eurovision fan, goes there with his tweet of support for our competitors Alvan and Ahez.

9:25 p.m. : Saudade, saudade de Maro is my favorite from the first semi-final. It’s soft, it’s lightweight, there’s no fan to fly the singer’s hair, who doesn’t look like she struggled to fit into clothes three sizes too small. We take a deep breath, close our eyes, and enjoy.

9:24 p.m. : Good Romania does not actually do in the end and the intellectual.

9:20 p.m. : Anyway, Romania fell to the accursed place, the 2nd, from where never an artist won the competition. Forget Friday the 13th, at Eurovision, it’s the 2nd that brings bad luck.

9:21 p.m. : Budgetary restriction obliges, the marcels of the Romanian dancers are much, much, much too short. A bit like the text of Llamame (“Call me”, in VF), a mixture of Spanish and English, which does not play too much on the intellectual elevation of the spectator.

9:16 p.m. : “Where are you now?”, shouts the singer of the group We are Domi. In first position to start the contest, which is certainly not the best place to win. Otherwise, apart from the energy of the song and the fact that the guitarist plays his instrument with an archer, nothing really transcendent in this stroboscopic debauchery. You will understand, I don’t like it too much.

9:12 p.m. : An auction of beautiful pieces related to Eurovision is organized at the time of the competition, featuring the dress that Jamala, winner of the 2016 competition, wore when the competition opened a year later. Proceeds from the event will go to an NGO helping refugees. 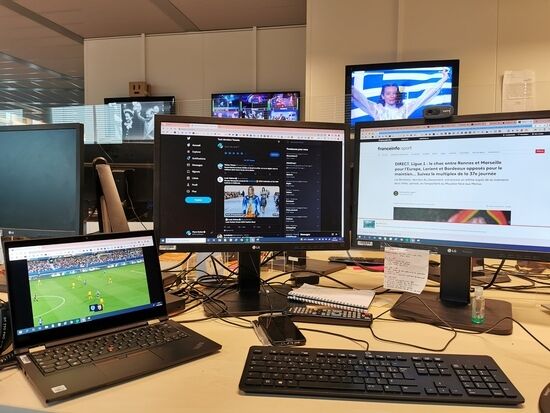 9:09 p.m. : From Tlayacapán, state of Morelos, Mexico, in the shadow of the Popocatépetl volcano, it may be “interesting”! VERY good luck to France and the BRETONS in particular! 😉😘

9:09 p.m. : A bit like at the Olympic Games, the 25 qualified countries parade, flag in the wind. Remember that five countries are automatically qualified for the final (including France), and that the other twenty won their place at the end of the semi-finals.

9:09 p.m. : The singer Laura Pausini, who had her moment of glory in the 2000s, is one of the presenters of the competition, along with Mika (the Lebanese singer who was sworn in tele-hooks in the Boot) and the Local Nikos Aliagas, Alessandro Cattelan, To his credit, nearly 10 years of presenting X Factor Italia and two editions of David di Donatello, the house Césars.

9:05 p.m. : Magnificent early evening in Turin. My favorite night of the year is about to begin. Go France (and long live Brittany!) 🇫🇷

8:56 p.m. : Tonight Europe will show the best of itself. Tonight, we will be united in the diversity of our common culture! Tonight is #Eurovision! 🤘 Big day for Alvan and Ahez! TAN DE’I! Long live Brittany. Long live France and long live Europe! 🎸🇫🇷 @EurovisionF2

8:56 p.m. : Ah, the Minister of Territorial Cohesion, made famous by the “Rural Break”, Joël Giraud, supports our tricolor group engaged in Eurovision.

8:51 p.m. : Unexpected support of the candidate Nupes in the legislative elections and figure of the ecologists to Sandrine Rousseau to the French group Alvan and Ahez. To my knowledge, this is the only policy outside of Brittany to have tweeted a short note to the address of our representatives.

8:48 p.m. : @Felis Catus Absolutely, and I haven’t missed a beat. So, I’m giving you the benefit of costume of Achille Lauro, eliminated in the semi-finals under the colors of San Marino, in prime time on the public service. Her unlikely costume is worth taking a 3 minute break from your dinner. For the record, this gentleman’s dad is a magistrate at the Italian Supreme Court.

8:47 p.m. : Thank you, Peter. It’s true that Abba and Céline Dion – whose style is really not mine – are objectively legendary. In fact, I prefer the genre of Fatals Picards! Before the big night started, weren’t there semi-finals at the Rome tournament?

8:44 p.m. : Saturday evening, Rennes and Brittany will be behind the group Alvan & Ahez who will represent France in the final of #Eurovision in Turin. Come to the Ferme de la Harpe to follow the event on a giant screen! @alvan_music @ahezmusic #emojibzh

8:43 p.m. : This evening, the department where Rennes is located is changing its name to be renamed Ille-et-Fulenn (from the name of the song of our representatives in the final, Alvan and Ahez). A giant screen has even been installed in the Breton capital to allow their supporters to encourage them.

8:42 p.m. : You plan to watch the Eurovision final tonight (and read the live that I prepared for you with love?) You are quite right ! A study by Imperial College London (relayed by Slate) shows that the viewers of the great raout of the song come out happier. It’s even clearer when their country performs well. Alvan and Ahez, you know what you have to do…

8:34 p.m. : @Jerome Alas, if the concept of the group still exists, several of its members are dead, including the star, the equivalent, all things considered, of Posh Spice in the Spice Girls. We will take the opportunity to iron their passage to Eurovision 2012.

8:32 p.m. : #eurovision good evening Pierre do you know if the Russian grannies who made the buzz a few years ago still sing?

8:24 p.m. : @Kalima Sure ! The show has also been emulated across the Atlantic, there is even a variant of Eurovision with representatives of American states. Some stars took part, but it was a young Kpop singer, AleXa, who won the first edition under the colors of Oklahoma.

8:21 p.m. : Hello Pierre, your evening promises to be very rich! I was wondering if you had seen the movie Eurovision Song Contest with Will Ferrell (who also wrote the screenplay). I find that this American point of view on our European show is full of benevolence and tenderness. This film is certainly not in the top 10 of @cinephil, and it is obviously forgiven, but I think it speaks to aficionados of this great mass of kitsch, although it is much more than that..

8:21 p.m. : @Nat64 Absolutely, the jury votes on the strength of the general rehearsal, which took place last night, 24 hours before the public competition.

8:20 p.m. : It is obvious that Ukraine will finish in 1st position in the public vote (given the economic context, the countries will agree on the benefit of the yellow and blue victory..). But not sure that the jury is of the same opinion! Besides, does the jury vote before the performances?

DIRECT. Eurovision 2022 final: Will Alvan and Ahez end the French curse? Follow and comment the contest with us