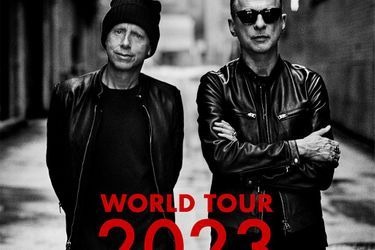 Now reduced to the duo Martin Gore and Dave Gahan, the English group presented on October 4 in Berlin “Memento Mori” its next album which will be accompanied by a world tour. The singer tells us about it exclusively.

Paris Match. When Andrew Fletcher died last May, did you doubt the future of Depeche Mode?
Dave Gahan.Yes, Martin and I first spent two days in shock at this terrible news. But we had already started recording our next record and decided to call it “Memento Mori”. We thought we had to finish this album to move forward. Fletch alas hasn’t heard of our new songs, he was not invested in the process at the time of his disappearance.

“Memento Mori” means “Remember that you must die”. Did that seem premonitory to you in retrospect?
It’s normal for you to ask yourself the question, even if you can see it that way, but it’s not the case. On the contrary, this title is above all a celebration of life. As we are all going to die, we might as well try to live our own lives as fully as possible… Myself in the past, I have known complicated, dark periods, like everyone else. And I’ve always tried to find a way out. Sometimes I have chosen paths that are destructive for me and for my loved ones. But for 20 years, I no longer fight with my demons… I have dark days, like everyone else, but I accept them. Because I don’t believe that art comes from suffering. But sometimes you need to hit rock bottom to bounce back. To better appreciate what you have and not yearn for what you don’t have.

“The comfort I found in the music itself”

Did success bring you no comfort?
Success is what sometimes threw me in the worst directions. Luckily I survived it… The comfort I found in the music itself. Often in the morning, when I wake up, I’m not in the best of moods. I have my coffee, I stay with myself before the day starts.

Often in these moments, I write things or I look back on an idea left aside. And there I like to play music, play a little guitar, let the melodies come, the chords… Often it doesn’t lead anywhere. But sometimes it becomes a song…

Do your songs have a social role when you perform in stadiums: are they there to entertain people? Or can they help?
I do not know. Me, they helped me in any case. Sometimes the songs we recorded take on a whole new meaning on stage when I perform them years later. It really is a strange feeling.

How many titles signed by you will be on “Memento Mori”?
Three of the twelve that will be on the album. Two come totally from me, from a sequence of chords that I found. Martin obviously contributed to this. I had a fourth one but eventually got tired of it and we dropped it.

When Martin agreed to include your compositions in the Depeche Mode albums, did that change everything for you?
Oh, he didn’t give permission for me to write. When I told him that I wanted to include my compositions on our albums, he was afraid that I wanted to take control of the band. But during the recording of “Spirit” he clearly explained to me that he wanted to be the author of the majority of the titles. I understood how he felt and I accepted. In January, when we started talking about the next album, I told him that this project only made sense if we also worked on my ideas. It would no longer be in my interest to simply show up to sing what he writes… I need to chat with him, to make music together. If that hadn’t been the case, I wouldn’t have started this project. I do this job for the creative exchange.

“We will always need each other”

Martin will always need your voice to carry his songs…
We will always need each other. With the death of Fletch we see even more that what makes the salt of Depeche Mode is our relationship, it is very clear now. When you hear the record, I don’t think you can say to yourself “The parts played by Fletch are missing”. That’s not what he was doing in the band.

What was he doing then?
Fletch wasn’t the one bringing in a synth part or a bass line. But he was part of the collective, of those who together make Depeche Mode work. For 30 years, his role had evolved. He was mainly the support of Martin, of his ideas, of his songs, he was his voice sometimes too. But his physical presence was also important. Now we will have to discover a new way of working together, it’s a new chapter that opens.

Depeche Mode: Dave Gahan tells us about the new life together