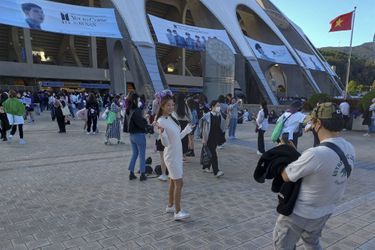 BTS gave an exceptional free concert on Saturday in the city of Busan transformed all week into a real festival for fans of the South Korean group. The purpose of this event was to promote the city’s candidacy for the 2030 World Expo.

In Busan, impossible to miss the streets decorated in purple, impossible not to see the banners, stands of derivative objects, shops, hotels, restaurants and taxis dressed in this color, symbol of the link between the BTS group and its fans. , a poetic way of saying “I love you”. This Saturday, the seven South Korean artists, twice nominated for the Grammy Awards, gave an exceptional concert in the city renowned for its beaches and landscapes. It was at the Asiad Main Stadium that thousands of spectators gathered for this event.

Exceptionally, the performance of more than two hours was completely free, as was its online broadcast. If 100,000 people were expected on site (in the stadium but also on the other giant screen broadcast areas across the city), millions of other admirers of the group were able to follow the concert live on the Internet. At the end of the show, the Weverse application thus displayed nearly 49 million views. Unfortunately, the traffic was such on the platform that the servers seem not to have held up, to the great despair of Internet users who had to go through other more or less official means to follow the live…

But there was no question of being discouraged, more than a simple concert, this event was intended to promote the candidacy of Busan at the next World Expo 2030. The city is in particular in competition with Saudi Arabia and Italy. And what better way to promote your country than to collaborate with its most famous ambassadors, who alone would bring back an average of 3.1 billion dollars to the South Korean economy every year. Their impact is also such that in a few days, even before the concert, the city of Busan welcomed thousands of tourists from all over the planet, reviving an economy in difficulty since covid-19.

The South Korean channel SPOTV News was not mistaken there since this Saturday, it headlined: “The great BTS saved Busan”. “The citizens of Busan show their gratitude to BTS who revitalized Busan with a mega concert. Not only the vendors, but also the taxi drivers all say with one voice, ‘I feel the huge influence of BTS’. “According to tourism and retail circles in the city this Friday, not only the rooms of luxury hotels but also those of medium and low-cost accommodation establishments around the venue of the boy band concert have all been booked for the nights of October 14 and 15,” writes the Yonhap news agency, adding that this had not happened for years.

On social media, many fans posted photos taken on the spot, showing the entire city in the colors of BTS. The police officers themselves were seen wearing purple face masks. For everything to run smoothly, the city had increased the number of transports this Saturday and the airlines had chartered more planes. The Busan Bridge was also illuminated in purple, before being the scene of a drone show after the end of the concert, in which the faces of the seven members of BTS were drawn.

The promise to meet again

The “Yet to Come in Busan” concert comes aslast June, BTS announced that they wanted to slow down their group activities to devote themselves to personal projects. The announcement caused a wave of panic, particularly on the stock market and in the media. But the seven young men of unparalleled success, two of whom are from Busan, have chosen to come together for this concert, once again proudly shining the colors of South Korea around the world. Surrounded by a group of musicians, they sang their greatest hits, witnesses of a long history of almost ten years, offering an enchanted parenthesis to their ARMY (the name of their fanclub). This is the first time in three years that BTS has performed in front of their South Korean audience, without covid-19 regulations. Last year, the seven boys gave a concert in Seoul during which the spectators, divided by half compared to usual, had to remain silent, prohibited from singing, dancing or shouting, because of the pandemic.

This time, everyone was able to give voice to their idols. From their first titles “Run” or “Save Me” to “Dynamite”, “Butter” or “Yet To Come”, they have led the spectators through their career, marked by hardships but also by the greatest victories. And unlike some who said they were going their separate ways or that the band would no longer perform together, all promised to grow old with their fans, never to leave them, no matter what the future and life throws at them. What already to make a date in 2030, if Busan wins the World Expo…

We deeply appreciate many people have supported and worked so hard for BTS concert, held in hopes of a successful World Expo 2030 bid for Busan.#WorldEXPO2030BUSANKOREA #YetToComeinBUSAN #BTS pic.twitter.com/c87wcb6qio

BTS gives Busan their concert of the century