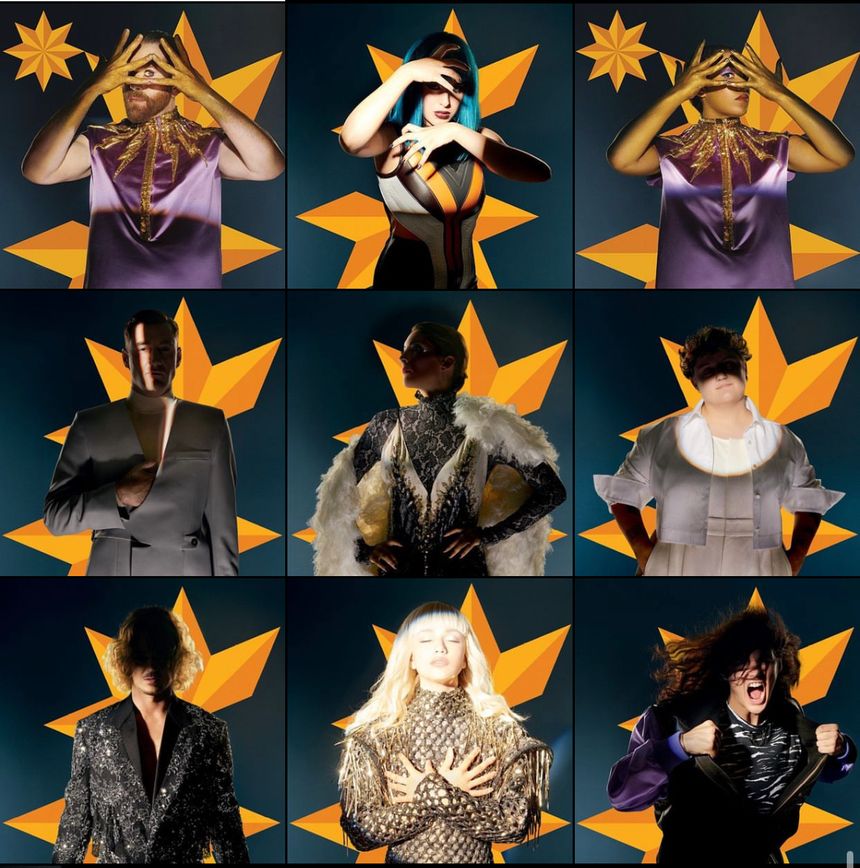 Get ready to forget everything you thought you knew about Starmania. The new version of Michel Berger and Luc Plamondon’s rock opera, whose first break-in date was played on Friday evening at the Palais Nikaïa in Nice, is not a cover of the original 1979 version, nor a repetition of following versions: it is a new writing of the show in its own right.

When the curtain opens, only a piano sits on stage, as a direct tribute to Michel Berger: the notes he wrote more than 40 years ago come back to life under the musical direction of Victor Le Masne and his six musicians. . As soon as the first notes of the Overture to the show, then of the song “Monopolis”, originally performed by France Gall, and here by Lilya Adad (who will play the role of Cristal alternately with Gabrielle Lapointe) we know that a part of magic will operate.

At the helm of this new version, in the shadows, Raphael Burgerthe son of Michel, who provided the artistic direction of the show, and in the light, Thomas Jollytalented director, crowned with success in the public theater as in the opera, and soon conductor of the ceremonies of the Olympic Games of 2024. Around them, the choreographer Sidi Larbi Cherkaouithe scenographer Emmanuelle Favre and the creator of the Vuitton house Nicolas Ghesquiere. A five-star creative cast to accompany a troupe of young singers, who are mostly unknown or unknown to the general public, and whose names will remain secret until Friday evening.

Between shadow and light

From the first minutes of the show, what captures the attention is the impressive decor designed to represent Monopolis, the city in which this story of love, politics, spleen and violence takes place. Inhabited by screens and rays of light, this immense structure is similar to a set of skyscrapers pierced by the branches of a star. As fascinating as it is disturbing, this decor creates the atmosphere of a Starmania which will constantly oscillate between light and shadow.

Thomas Jolly wanted to put the emphasis back on the story told by Starmania: that of the campaign for the presidency of the West opposing the businessman Zéro Janvier (David Latulippe) and the Guru Marabout (Simon Geoffroyalternating with Malaika Lacy), in a capital undermined by the abuses of a group of terrorists, the Black Stars, led by Johnny Rockfort (played by Como) and Sadia (Manet-Miriam Baghdassarian). While the Etoiles Noires kidnapped the TV star Cristal, Zéro Janvier puts himself on the arm of the ex-sex symbol Stella Spotlight (Magali Goblet), all under the eyes of the waitress of the Undergound Café, Marie-Jeanne (Alex Montembault), and his friend Ziggy (Adrian Fruit) she is in love with.

Haute couture work on the text

Before this 2022 version, Starmania had three versions in France, three others in Quebec. And each with a different dramaturgy. Luc Plamondon and Thomas Jolly have taken up their scissors to rearrange the tables and songs of this new version. The result is that for those who discover the mythical rock opera today, the whole will be fluid, the story easy to follow. For those who already knew the previous versions of Starmania, you have to accept being pushed around in your convictionsbut quickly, everything seems logical: for example, in the mouth of Zéro Janvier, the very journalistic “Something is happening in Monopolis” now sounds like a Machiavellian plan to gain the Presidency by surfing on the fear of the population.

Thus, the creators of this new version have taken the best of the previous versions to do a fine haute couture work similar to that of Nicolas Ghesquière whose costumes alternate between the sequins of the world of stars and sober costumes, sometimes similar to overalls, from the underground world. Musically too, the direction wanders between the influences of the original version, some coming from the following versions, and a new breath, resolutely modern, tinged with electronic notes.

The big hits (“The businessman’s blues“, “Against each other“, etc.) are almost untouched compared to their original version, and it works on the public, which choruses most of the standards.

On the other hand, on the lesser known titles and the sung sketches, Thomas Le Masne and Raphaël Hamburger allowed themselves to imagine there a “Ego Trip“supercharged, more rock than ever, a”child of pollution” (performed by Adrien Fruit at the top in his role of Ziggy) or a “Tonight we dance in Naziland” in apotheosis. Or to make the song “Sex Shops, Porn Cinemas“, disappeared from the show since 1979, a disturbing instrumental in the form of a bad trip for Stella Spotlight, camped by the singer Magali Goblet, one of the revelations of this premiere. And for the more die-hard, it looks like the creators wanted to hide “easter eggs” – yes, that cry you’ve been hearing for 40 years on the 1979 album is in exactly the same place in the 2022 show .

We sometimes hear new pieces in transitional music, and we enjoy rediscovering old titles, such as the excellent “Paranoïa” performed on Friday by Simon Geoffroy which gives its groove to this title full of percussion, or the very funny “Press Conference of Zéro Janvier” – whose score has been slightly revised to appear less clownish. If the character of the presenter Roger-Roger, is no more than a kind of artificial intelligence like Siri (whose voice is played by Thomas Jolly himself), the string arrangement that accompanies these moments of narration in the form of JT is captivating as much as faithful to the original version.

Light and colors, characters in their own right

From one chapter to another, the staging takes us into universes as different as they are recognizable: among the weak, we go from the underground café Underground Café where Marie-Jeanne (Alex Montembaultvery moving) strums his guitar, at the lair of the Black Stars represented by their car, a stolen convertible (could it be the Jaguar scratched in “When we come to town“?). In the upscale neighborhoods, the tops of skyscrapers are all light. And this is everywhere, it marvelously dresses the stage. Rarely have we seen so many spotlights on the same stage – some even appear regularly from the set. Light is a character in its own right in this Starmania, it accompanies the characters, sometimes responds to them, it is both a springboard and a cage for Zéro Janvier in “The Businessman’s Blues” (which earned David Latulippe the first ovation of the show).

Without divulging everything that happens on stage, the show is full of good staging ideas, from the first minutes of the show until the apocalyptic end of the show. Video is used shrewdly, with imagery oscillating between grayscale and red, and navigating between Soviet futuristic aesthetics and Fritz Lang’s “Metropolis” universe. And the humor is also present: we laugh when Thomas Jolly imagines a really good vaudeville-style scene or makes the projectors dance in rhythm on “Need for love”.

Here again, the staging does not spare the spectator: if it is necessary to “deprive” the room of a song because it takes place behind the scenes, a character draws a camera (neutron) which makes follow the ‘action way’Blair Witch Project“- another cinematic reference, we saw a few of them in the show, “Clockwork Orange” in the lead. If we have to cut a cult song before its last word because the action requires it, we will not have that last word. Again, drama is king.

There are of course some reservations, but they can be summed up in a few words: one can question the relevance of one of the final acts of the show (which we will not divulge to you), or that of a pure moment of fan servicewhich despite the technical prowess it contains and the emotion it arouses in the public, was really not essential for the story, and tends to get us out of it.

The best way to tell this story

It will also be necessary to keep in mind a question: the gigantism of the show doesn’t it put us at a distance from the characters who have always been seen, until now, as accomplices of the public, namely Marie-Jeanne and Ziggy? We will certainly have to wait for the show to be run in, and begin in earnest, on November 8 at the Seine Musicale, to have a real answer.

In the end, this new Starmania is not a new Starmania: it is Starmania. And maybe even the most successful version of Starmania. At the end of the 1970s, Michel Berger and Luc Plamondon imagined a story and a universe. Forty years later, the whole team that has worked for three years on this show may have finally found the best way, both the most aesthetic and the clearest, to tell us this storyto bring us into this universe.