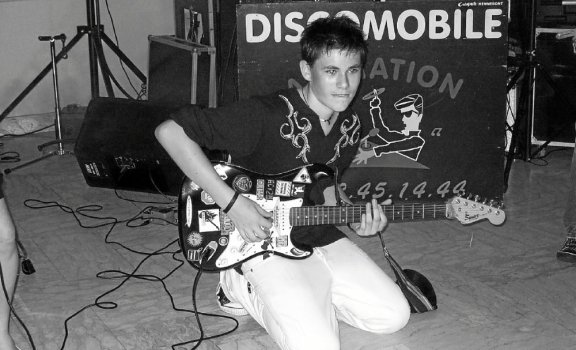 
Brittany will vibrate, this Saturday evening, in front of the contest of theEurovision. In the Lorient sector probably a little more than elsewhere. Alexis Morvan-Rosius, the now famous Alvan of the Breton group Alvan & Ahez, certainly resides in Rennes, but he is indeed from Lorient. “He was born in Lorient hospital 29 years ago. This is where his roots are and where he comes to recharge his batteries when he needs it,” confirms Carole Rosius, his mother. His family is still settled in Gestel. Where the young man discovered music. Very, very early.

“I kept the very first recording of his voice at his grandmother’s house. He was three years old and sang tunes learned at school in a big radio cassette. I don’t even know how he did it, if he stole a microphone or if he was already plugged into it,” smiles his mother, amused by these extremely early beginnings. At the same age, Alexis is also immortalized by his family, in overalls and T-shirt, playing the drums! Like a big. “He started music at a very young age. It wasn’t Celtic rock yet, but he was attracted to anything that was very rhythmic,” says Carole Rosius.

At the school of Gestel then at the college of Quéven, where his music teachers keep the memory of a “student a little dissipated but a good musician”, the young Alexis continues to explore his passion. Intensely. At eleven, he was enrolled in music theory lessons. Then guitar. Before quickly continuing his self-taught learning. His first scene comes at 14 years old. And not just anywhere: at the Les Arcs cultural center in Quéven. Carole Rosius remembers it like it was yesterday. “It was on the occasion of the Music Festival. He had been offered to come and play and he had performed a song by Gérald de Palmas ”.

His years at Lycée Dupuy-de-Lôme, in Lorient, only confirmed this irrepressible desire to play. As soon as he has the opportunity, the young man isolates himself in his room to compose music. Then, he rushes into the bars to present his creations. Fifteen years later, the Lorientais will represent France at Eurovision with the three singers of Ahez. His mother is not really surprised. “From the moment the guitar came into Alexis’ life, he knew he wanted to do this later.”

In front of the TV in a small committee at Gestel

On March 5, 1.5 million viewers discovered him on France 3 during the French selections. This Saturday evening, it will be the turn of the whole of Europe with more than 180 million people expected in front of their TV. Carole Rosius, who could not hold back a tear during the first evening, expects a moment rich in emotions. “I’m happy for him. It’s a wonderful achievement and showcase,” she confides, while thinking of her own mother, an assiduous viewer of Eurovision.

While Alexis and his three companions will be in the spotlight in Turin, his family will experience this funny moment from Gestel. There will be Carole, the mother; Mark, her husband; but also Louna and Lilian, Alexis’ sister and brother, aged 20 and 15. “We are going to live this in a small committee so that it remains a moment for us”. Carole doesn’t dare think of a victory. “Participating is already an incredible experience. I want him to enjoy it, to take and give pleasure.

Alexis Morvan-Rosius, the child of Lorient propelled onto the Eurovision stage