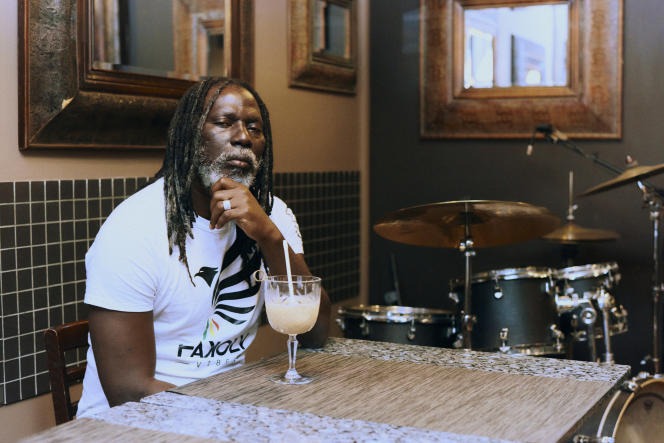 During his quarter of an hour of regulatory delay specific to any self-respecting international star, we had time to imagine the guy’s style of the day. Would he come dressed in a traditional boubou woven in West African cotton or dressed in one of his favorite military outfits? Would he wear the colorful green-yellow-red trio, symbol of Rastafarianism, on a necklace of clay beads or on an embroidered patch representing Africa?

Missed. This Thursday, September 29, the king of African reggae left his pictures in the closet of his favorite hotel, planted at the end of an avenue in Clichy. The hood on the head and the rebellious dreadlocks which protrude, Tiken Jah Fakoly crosses the doors of the Black Coq, a Franco-Cameroonian restaurant in Clichy (Hauts-de-Seine), dressed in a gray tracksuit. We can just make out three touches of green, yellow and red on his white t-shirt with the “Fakoly Vibes” logo.

” Older sister ! How are you ? »he says to the boss before settling at the back of the room, next to the space reserved for concerts and the kitchens where the traditional Cameroonian ndolé is served – a dish made from leaves and groundnuts – or even braised chicken and fish accompanied by the essential Ivorian attiéké, ” like at home “.

Waiters, bartenders and customers do not turn on the passage of the “Jah” (name given to God in Rastafarian culture). Here, the 54-year-old Ivorian singer is a bit at home. “I have been one of Le Coq’s first customers for more than fifteen years”, he boasts, while waiting for the arrival of the tour that “L’Epoque” intended to pay. Missed again, the press officer of Wagram Music, which has been following Fakoly since the start of the promotion of his new album (Power Heistin stores on November 4), doubled us.

A ginger juice for him, a bissap for us. When his large glass arrives, Tiken Jah hums Little country by Cape Verdean singer Cesaria Evora. An ode to the nostalgia of exile that he whispers as he begins to drink, he who was forced to leave his native country for neighboring Mali in 2002 after being threatened with death because of his unproven acquaintance, with the rebellion that shook the north of Côte d’Ivoire, where he was born.

In his first album mangercracy (1996), as in History class (1999), Tiken Jah Fakoly positions himself against ivoirité, a concept agitated by the policies of the time and which served to marginalize West African immigrants as well as communities in the north of the country. “My mission is to dismantle the manipulations of politicians and to awaken the consciences of the people”he says, a bit messianic.

You have 65.3% of this article left to read. The following is for subscribers only.

A drink with Tiken Jah Fakoly: “A reggae man who is not interested in politics should play zouk! »