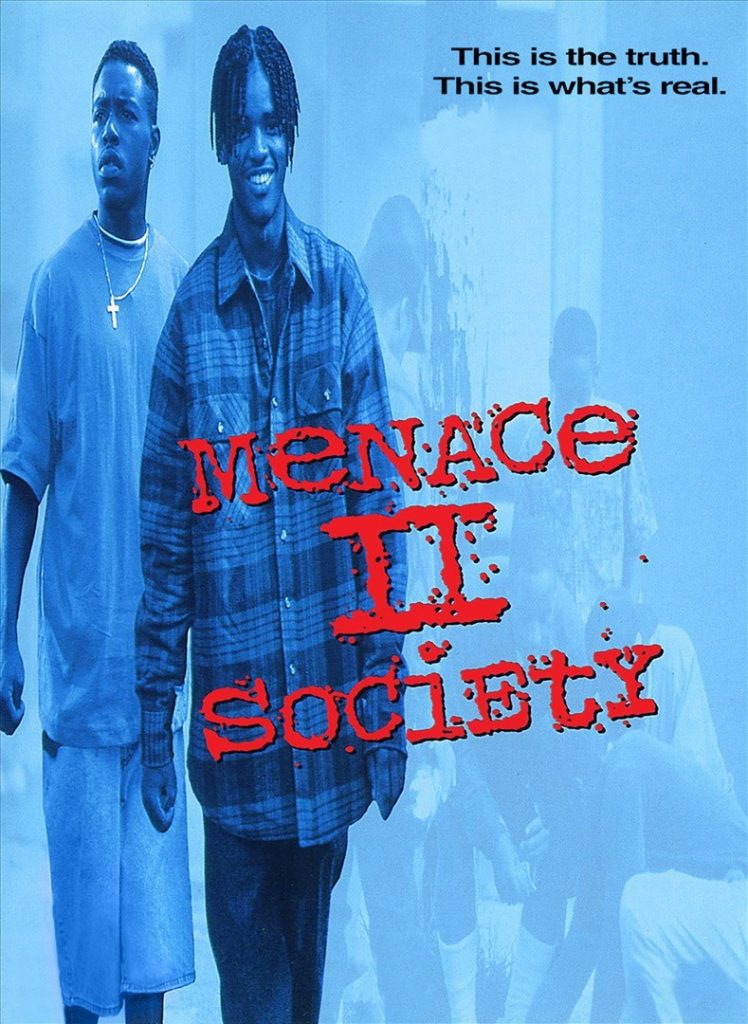 Released on May 26, 1993, the Hugues brothers’ film has since traumatized all the generations that have followed…

2. Another assumed source of inspiration for the film: the use of slow motion during the impacts of bullets stung at John Woo.

3. As surprising as it may seem, the twin brothers Allen and Albert Hugues, directors and screenwriters of Threat II Society, were only aged Barely 20 years old at the time of filming.

4. Their inexperience behind the camera caused them to cut one of the very first scenes they shot because they thought it was bad.

“On the third day, we shot a riot scene in the prison where Caine finds himself incarcerated. The thing is, we had absolutely no idea how to film it. We didn’t have any stuntmen, the shots all looked more fake than each other… We told ourselves that our careers were over, that we had our chance and that we had screwed it up. »

5. On the tray, the distribution of tasks between the two brothers was done in the following way: Albert managed the lighting, the cameras and all the technical aspects, while Allen concentrated on the plot and the actors.

6. On the poster, the gun that Caine holds in his right hand has been erased at the request of the studio.

7. “Menace II Society is a movie for white people” said Albert. “It’s a film so they know what’s going on in the ghetto. »

Good attention, after having seen it, “If you hate black people, you will hate them even more afterwards” said Allen.

8. Caine, the nickname of Kaydee Lawson (Tyrin Turner), refers both to Charles Foster Kane, the hero press magnate of the masterpiece Citizen Kane of Orson Welles, but also and especially to Cain, eldest son of Adam and Eve, murderer of his younger brother Abel.

9. Yes Menace II Society could largely to be shot right in South Centralone of the most dangerous ghettos in Los Angeles, it is because the main gangs had at the same time concluded a truce, the famous Picnic Tip.

10. Numerous gangmembers were hired by the productionwhether for security or as an extra – in some outdoor scenes, like the one where O-Dog visits Caine at his grandparents, or the one where the police arrive while the whole gang is seated on a low wall, 100% of the extras are locals.

11. However, filming had to be suspended two days after the Hacienda Village Bloods gang opened fire in Jordan Downsa neighborhood owned by the Crips.

12. Any overly explicit reference to Crips and Bloods has been deliberately avoided.. The Hugues brothers felt that this would have boxed the film in and the scope of its message would have been reduced.

13. While the studio wanted to see “a platinum rapper” in the cast, MC Eiht’s A-Wax role was first offered to NWA’s MC Ren

The story doesn’t say if he turned down the offer or if he wasn’t deemed convincing enough at the auditions.

14. Other rappers present in the credits: Pooh-Man who plays Doc, Saafir who plays Harold, and that trickster from Too Short who plays Lew-Loc (the guy who hands a shotgun to O-Dog).

15. Due to budget constraints, that same shotgunthe Smith & Wesson Model 3000, is used by one of Caine’s killers in the very last scene.

16. 2Pac was originally set to star in Menace II Society. However, he took it very badly to be hired to play the very wise Sharif when he realized that all his fellow rappers had been given more roles. street.

Followed lively discussions with the Hugues brothers so that they get him the role of O-Dog. They ended with a thank you.

17. Extremely upset to have been weighed down in this way, he began very dishonestly to proclaim on all the rooftops that he left the ship on his own because he refused to play “a muslim mobster”.

Worse, a few months later, the author of California Love showed up with about thirty of his homies on the set of the clip Trigga Gots No Heart of Spice 1 on which Allen Hughes was working and beat the latter with a baseball bat.

18. So much animosity is also partly explained by the fact that 2Pac and the Hugues brothers had collaborated on many music videos in the past as If My Homie Calls Where Brenda’s Got a Baby.

19. The melody of Streiht up Threatthe flagship song of the Menace II Society soundtrack, is not a sample. MC Eiht heard it by chance without remembering who wrote it.

“At the time I walked everywhere I went with a tape recorder. I recorded the melodies that came to mind. One day I came across these few notes without remembering where I had heard them. I hummed the tune on my tape recorder and passed the tape to DJ Slip to play. »

20. According to Spice 1, figure of the Californian rap scene, the role of O-Dog would have been offered to him first.

“I had the script in my hands, but my manager did not stay in contact with the Hugues brothers. I wish I had a second chance. I wouldn’t even have needed to play, I would just have had to remember things that happened to me. »

21. As incredible as it may seem, Larenz Tate made his big film debut in the guise of “America’s Nightmare” Kevin ‘O-Dog’ Anderson.

22. The infamous replica “What’d you say about my mama?” » swayed by O-Dog after the grocery store boss blurted out that he felt “sorry for his mother” was improvised by Larenz Tate.

23. According to the Hugues brothers, O-Dog is 15 years old, he can neither read nor write and he was raised, not by his parents, but by his sister.

24. Lucid, Larenz Tate is not the most tender with his character despite the aura of worship that surrounds him: “If O-Dog is an idol for some, it’s because nothing can be done for them. »

“You can clearly see that he is not fully developed psychologically and emotionally. That’s why he reacts this way to the slightest offense. »

She wasn’t a complete rookie, however, and had been seen on TV shows before. True Colors, 21 Jump Street and A Different World.

26. Charles S. Dutton, who plays Mr. Butler, one of the few characters to show himself to be enlightened and benevolent towards his neighbor, has known a youth similar to the protagonists of the film.

Sentenced in particular for murder and assault, he spent several years behind bars before becoming interested in the fight for civil rights, then in cinema.

27. In the grocery store, the beer level of the St. Ides 40 bottle that Caine drinks from the neck constantly changes. At the very end of the scene, it is almost full.

28. When Harold is lying face down on the floor, in contractions after being shot, it is not Saafir that we see on the screen, but Albert Hugues. The rapper could not be present that day on the set.

29. When Samuel L. Jackson, Caine’s father, shoots a friend of his who owed him money in front of his son, he fires eight shots while using a revolver – a cylinder can only contain six bullets.

30. When Caine is seen cutting crack pebbles with a razor blade, “50% of the drug is real” according to the Hughes brothers.

31. In the same vein, the joint that A-Wax/MC Eiht smokes while driving Caine and O-Dog towards Harold’s killers was run over with marijuana.

Take a good look at the sceneMC Eiht inhales the smoke well, Laurenz Tate spits it out.

32. The scene in which Chauncy has fun manhandling an insurer who asks him to steal a car must have been dubbed by the actors in post-production because of the too many planes in circulation on the day of filming.

33. The scene in which Caine visits his former mentor Parnell in the parlor was added at studio request in order to give the film “more heart”.

34. If most characters do lean their weapon horizontallyit is because a few years earlier the Hugues brothers witnessed a robbery during which the assailants held their guns in this way.

Where for them it was a question of adding a touch of realism to their film, this unorthodox handling will then be adopted by all the gangsta rappers and drive-byers in the country, as well as by many big Hollywood productions like Se7en Where Usual Suspects – more on the subject here.

35. Magic of mismatchesthe Second Generation Glock 17 that O Dog wields throughout the movie Dog transforms into a Beretta 92F when Caine beats up Chauncy, and then briefly into a SIG-Sauer P226 during the final scene.

36. Dwayne Barnes, the actor who interprets the crack addict O-Dog kills for offering him a blowjobhas very badly experienced the way his role was perceived.

“When I told MC Eiht that I had moved to Los Angeles for a year to pursue an acting career, he was surprised that I had come all this way to ‘play a crackhead and tell those bullshit’. I was humiliated. »

“More generally, in the black community, the role was not very well received. I found out later that Allen and Albert Hughes actually had found no one else willing to play this character… »

38. It is THE plot hole of Menace II Society: When the police summon Caine for the double murder of the Asian couple thanks to the discovery of his fingerprints at the scene of the crime, they should also have summoned O-Dog for the same reason.

When the Hugue brothers realized this, they first edited all the shots of O-Dog’s hands in the grocery store. They then reconsidered their decision, telling themselves that fiction could take precedence over realism here.

39. Very ironically, the black and white film shown on TV when Caine’s grandfather lectures him is Life is beautiful by Frank Capra.

40. Menace II Society has it stood the test of time? Well not really according to Allen and Albert Hughes.

“If we talk about themes, yes. If we talk about cinema itself, we were victims of the times (…) The film hasn’t aged very well. Camera movements and dialogue are very dated. »

“I think that black directors, as long as we fit into this box, then benefited from a pass for their major faults. There weren’t many of us, so if the acting or the dialogues were bad, the white critics didn’t dare fall on us. Or they really thought it was all real! ‘Oh, it’s black, so it’s true. This stuff is amazing!’. You were entitled to some sort of pass. »

40 anecdotes about Menace II Society, the most gangster of ghetto films


We have our social media profiles here as well as other pages related to them here.https://kjovi.com/related-pages/